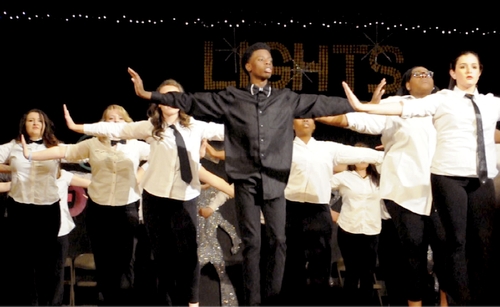 After many theater-deprived years, West Rowan High School has finally embraced the magic of musicals.

For the first time since 2005, West Rowan put on a groovin’ production, utilizing the chorus and drama departments, led by Justin Snyder and Brittney Peters, to create a spectacular show for people of all ages in the community. The school’s art department also was involved through creating all of the props.

The musical premiered on April 24, and there were also performances on April 25 and 26.

The theatrical storyline was about an agreement between a nerdy girl, Alison (played by Megan Smith), and an apathetic senior named Sean (played by Jose Ruano), who needed to complete his senior project.

Sean was in trouble, seeing that his deadline was fast approaching, and the geek agreed to create the senior’s product, which was to be a motorized shopping cart. However, a mishap with the ingredients led to nuclear waste being used to engineer the cart, resulting in a time-traveling machine. As Alison continued to work to figure out a solution, she and Sean bonded as friends and eventually, indeed, arrived back home.

Beginning in the 1950s, Alison and Sean experienced the most popular musical and theatrical numbers from each decade, performed by a large group of dedicated singers, dancers and actors. There were guest appearances by Frank Sinatra, Madonna and even Lady Gaga.

Students performed hit numbers such as, “You Can’t Stop the Beat” from “Hairspray,” along with many other popular songs, such as “Benny and the Jets,” “Vogue” and “Life is a Highway.”

Success with this musical has led to more involvement and popularity of West Rowan’s arts programs, and they hope to continue their productions in the future.

Blackburn is a junior at West Rowan High School.