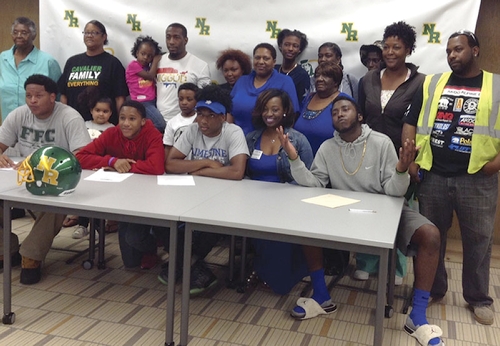 SPENCER — Jaleel Hitchens will continue to hit the mats. The North Rowan senior signed with Limestone College and will wrestle for the Saints starting next year. Perhaps the best part is the chance to fulfill a promise he made with his mother Shontae Hosch.

“I promised my mother I’d get a degree, and I’m so happy my talents can take me there,” Hitchens said.

Hitchens isn’t going into next season at Limestone, a Division II program in Conference Carolinas, with the idea of being satisfied if he cracks the top 10 in his weight class. He wants to reach the top.

“I don’t want to be that wrestler from Salisbury who just went to college,” Hitchens said. “If I’m not [trying to be] the best, then what’s the point in doing it?”

Though he has to cut a good bit of weight before reporting to Gaffney, South Carolina on Aug. 10. Hitchens won the Rowan County Championship wrestling at 145 pounds. He was the only wrestler from North Rowan to earn all-conference honors in the Central Carolina Conference.

Hitchens went into the 2A Midwest Regional tournament at Monroe Parkwood seeded third in the same weight class. He won his first two matches in the tournament with second-period pinfalls. Hitchens, however, had to forfeit his semifinal match and his first match in the consolation bracket to miss out on the 2A state tournament.

When he signed with Limestone, he said he checked in around 170 pounds. Hitchens has been training with his uncle, who Hitchens said is a cage fighter, and the plan is to bulk up before cutting weight to get back down to his wrestling weight.

Hitchens, who took up wrestling at 6 years old, is receiving money on an activity grant for student-athletes. He said he is wrestling to earn a scholarship. And he knows what it will take to reach that goal.

“It’s just hard work,” Hitchens said. “You have to work harder than everybody else. As long as I focus and stay on my grades, then I’ll be a great athlete.”

North Rowan football players Sakil Harrison and Wesley Jeffries are heading far from home to further their education and football careers. Harrison and Jeffries will attend Feather River College in Quincy, California. The school is a three-hour drive north of Sacramento into the Plumas National Forest.

It’s a long way from home. Harrison and Jeffries are teammates at North Rowan, but they are also close friends. Harrison said Jeffries is his big brother and both look up to each other.

“I don’t like to be out of my comfort zone,” Harrison said. “But I’ll feel more comfortable [with Jeffries there] and be able to work harder, and I have to work harder because there is no second chance.”

Harrison led the Cavaliers’ receiving corps with 540 yards receiving and hauled in a team-high seven touchdown passes. His best effort came against Carson in the second week of the season with 10 catches for 149 yards and two scores in the Cavaliers’ 42-28 win.

The 6-foot-3 receiver, who is considering studying psychology among other fields, wants to transfer to a four-year school and pursue a degree after his time ends in Quincy.

Jeffries was a stalwart on the Cavaliers’ fierce defensive front. He registered a team-high 28.5 tackles for loss and six sacks. The senior defensive tackles’ standout game came against two-win Thomasville. He ended up with a season-high nine tackles, including six for a loss.

When he gets to California, Jeffries will move from defensive tackle to defensive end. He said he plans to work on his strength and speed before leaving for California.

Jeffries, who plans to study computer engineering, was committed to North Carolina A&T before the defensive line coach left for another school. He said he hopes he is recruited by a four-year program while in California.