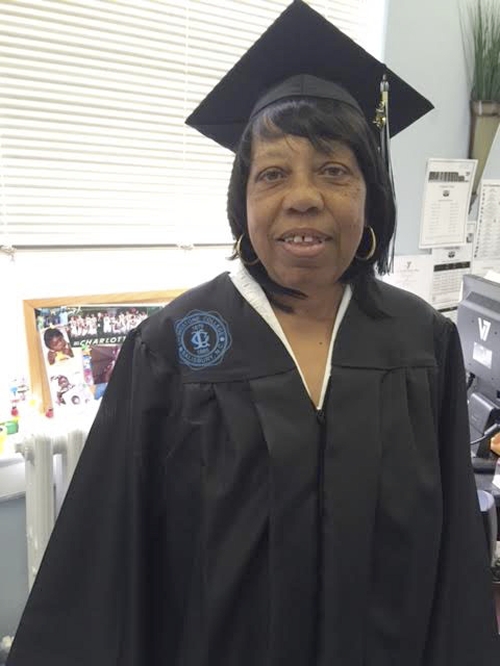 SALISBURY – At times, classmates had to help Ingrid Alexander Streater out of her car and up the steps of the Andrew Carnegie Library so she could study.

And there were days when she wondered whether she would, indeed, get to walk across the stage and receive her degree from Livingstone College President Dr. Jimmy R. Jenkins, Sr.

Forget about the normal obstacles facing most students, including being ill-prepared for college, inadequate financial aid and peer pressure. Streater earned her bachelor’s degree in criminal justice despite being on dialysis three days a week since 2014.

“Mom is a fighter, and she said she wasn’t going to give up,” said Stephanie McNeil, financial aid director at Livingstone College and also an alumnus. “She found it very challenging to go back to college at her age, but she attributes her accomplishment to a lot of support from different people at Livingstone, and we’re all so proud to see her reach her goal.”

Streater, 65, enrolled at Livingstone through its Evening & Weekend College in 2011. Years earlier, she was enrolled in the nursing program at Rowan-Cabarrus Community College but had to drop out because commuting to Concord got to be too much for her.

Despite her medical challenges and the fact that she’s raising two great-grandchildren ages 4 and 5, Streater was determined to graduate.

“When times got tough I just kept praying and praying,” said Streater of Salisbury. “I told the Lord I wasn’t giving up. Just because I have renal failure, that’s no reason to stop, and I wasn’t going to stop. I said it’s no good for me to encourage other people to go to college and for me not to go myself, so I just made myself get up and go to class and keep learning.”

Streater said she couldn’t have made it without the help of several people at Livingstone, including Gregory Hill who works in the library, Benjamin Davis who teaches math, Carol Pickett who runs the Evening & Weekend College and Dr. Frederick Ford, who chairs the Criminal Justice and Sociology Department.

“I went to Benjamin Davis for tutoring, and he was very helpful to me,” Streater said. “And Mrs. Pickett and Mr. Hill were helpful, too. But Dr. Ford was my biggest support system on that campus. When I wasn’t feeling well and was doing my homebound study, he would bring me my work and come pick it up. I love Dr. Ford.”

Streater said she hopes to eventually be able to do something special for Ford, Davis, Pickett, Hill and a few others at Livingstone who helped her. She said it’s hard to put into words how she felt on May 2 when she heard her name called and walked across the stage.

Several people attended Livingstone’s Commencement on behalf of Streater, including her children Rodney Streater of Lexington, Andre Whitt Alexander of Spencer and McNeil. Her siblings Angela Hunter of Concord, Betty Sasser and Frances Ingram of Salisbury and Walter Alexander, Jr. of Granite Quarry, were also there, as were six of her grandchildren and four of her great-grandchildren.

After the graduation, even more of Streater’s grandchildren and great-grandchildren – there are 41 in all – attended a cookout in her honor that was thrown by McNeil. To Streater’s surprise, Pastor Samuel Washington of Solid Rock House of God, and his wife, attended.

“Stephanie gave me a wonderful cookout after graduation, and my pastor and his first lady were there,” Streater said. “I was so glad to see them.”

Many people in Streater’s shoes would have given up long ago. But the woman who’s known for counseling neighborhood children about doing well in school and staying out of trouble said giving up was never an option.

“I’ve been through a lot of things, but I just pray,” Streater said. “I guess through it all God wanted me to graduate from Livingstone.”

Jenkins says he couldn’t be prouder of Streater.

“We all face challenges, roadblocks and setbacks in life, but Ms. Streater is a living testimony to what can be done when you’re determined to succeed despite the odds,” Jenkins said. “I cannot tell you how proud we are of her for persevering and becoming a graduate of Livingstone College. I’m sure her story will serve as an inspiration and a blessing to many.”

And now that she’s earned her degree in criminal justice, what are Streater’s plans?

“I’d like to get a job working with juveniles,” she said. “I’ve spoken with different police officers here in Salisbury, and they’ve told me about different departments I might be able to work in now that I’m finished.”

HSF will hand out 2015 Preservation Awards May 28

SALISBURY —Hundreds of hours are spent each year as owners, volunteers and contractors restore the historic buildings that define the... read more