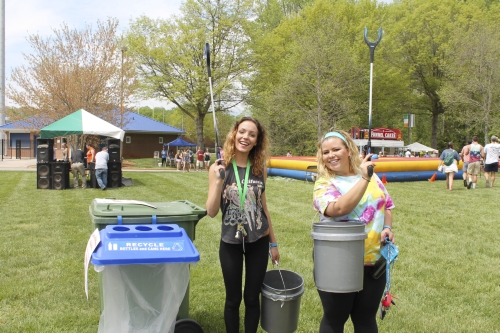 Despite the large crowd and the number of products consumed, CatawbaPalooza was a successful zero-waste event.

Jan Gillean, Catawba’s assistant dean for campus activities and programming, says every event held on campus could be a zero-waste event, but “you have to have the right stuff and a plan of action.”

Only 2 pounds of trash items that could not be composted or recycled were generated at the event, but 357 pounds of materials were diverted from the landfill because Gillean and the CatawbaPalooza committee had the right materials in place.

The 357 pounds of materials that could be composted went to Gallins Family Farms in Mocksville, where it will be turned into compost for gardening, and 134 pounds of aluminum and plastic, along with a bin of cardboard, were recycled. The 2-pound trash bag contained the food service gloves and the plastic bags that hamburgers and hot dogs were packed in.

To that end, the junior class Student Government Association officers made posters for the compost bins that showed all of the items that could be composted.

Those posters were even printed on the backside of other leftover posters, Gillean added.

The committee worked with vendors, such as Beaver Food Service, to purchase compostable plates and cups.  Another vendor, Mr. Cone Soft Serve Ice Cream, was enthusiastic about the zero-waste project and used compostable spoons with the ice cream they served.

The CatawbaPalooza committee supported the zero-waste plan by choosing an event giveaway – Camelback water bottles – that can be used by students to reduce the use of disposable drink bottles. The first 250 students at the event received these giveaways.

Gillean said her team will be incorporating BYOC, or “Bring Your Own Container,” at future campus events in hopes of cutting down on the use of bottled water. Her goal is to make all future student activity events on campus “zero waste” if possible.

“I’m not really that green, but I was impressed that we were able to do what we did at our event,” said senior Uriah Futch, a member of the CatawbaPalooza committee.

Catawba began its composting efforts with Gallins Family Farm in 2013 when it implemented steps to compost all the food waste from the dining hall. Since that time, Gallins has provided the bins and has picked up the food waste every week.

A cooperative venture of Gallins, Chartwells Dining Service and the Catawba Facilities department, the composting project helps the college save money from landfill costs and waste hauling fees. It also helps reduce greenhouse gas emissions, a goal of the American College and University Presidents’ Climate Commitment, which Catawba trustees adopted in 2007.