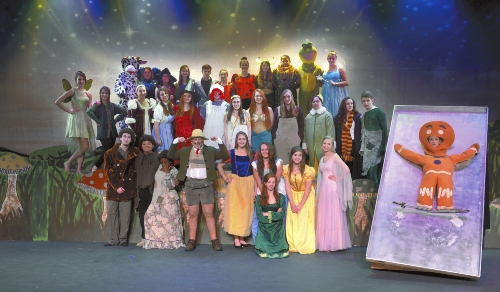 The cast of Jesse Carson High School’s presentation of “Shrek the Musical” poses for a group photo in costume. Wayne Hinshaw/For the Salisbury Post

Carson High School’s spring musical tells the tale of true love, a gallant hero, his trusty sidekick, a beautiful princess and an evil king – oh, and giant green ogres too.

Carson theater teacher Alex Reynolds said that each year, they try to pick a musical different than the year before.

To contrast last year’s production of “Annie,” they wanted to do something funny.

“It’s a buddy adventure,” Reynolds said. “We picked something that has fart sounds.”

“The show is just silly,” he added.

The musical closely mirrors the popular 2001 movie about a giant, green ogre named Shrek, whose home in the swamp was infiltrated by fairytale characters who were kicked out of their own homes in a nearby kingdom. In an attempt to reclaim his home, Shrek goes on a quest with his Donkey companion to save a princess.

“Most of the dialogue and the story are very much the same,” Reynolds said, adding that they “kept most of the good bits” and added music.

Producing a musical based on an animated movie is a challenge.

“Shrek is so specific,” Reynolds said. “You cannot disappoint.”

It takes two hours to get the actor in costume, glue on the prosthetics and apply his green makeup.

“Some of the magic moments are difficult, but fun” to perform, Reynolds added.

The music is a mix of popular Broadway styles. There’s an old Broadway piece, a rock number and a “’I’m in love with you’ ballad,” he said.

Roughly 100 students make up the cast of Shrek. They are joined by a 22-member student band directed by band teacher Jeff Street and 15 technical crewmembers.

The school’s art and drafting classes also played a key role in preparing for “Shrek the Musical.” For the past few months, they’ve spent hours designing and building the set.

Daily rehearsals began in February, and over the past three weeks there have been two evening sessions for rehearsals or set building.

“Shrek the Musical” is truly a student production. Not only are the actors, dancers and musicians Carson students, the technical crew is made entirely of students.

“We don’t call the show at all,” Reynolds said.

Students are in charge of lights, cues, sets and props.

“We have a ball,” Reynolds said.

The side-splitting comedy is fun for the entire family. Children will be enchanted by the magical storyline, and adults will enjoy inside jokes woven into the dialogue as well.

“Shrek the Musical” debuted Wednesday night, and there will be four additional shows this weekend. They will be Friday at 7 p.m., Saturday at 3 p.m. and 7 p.m., and Sunday at 3 p.m. Premium tickets are $12 apiece and general admission tickets are $7.

Tickets can be purchased online at www.carsontheatre.com.