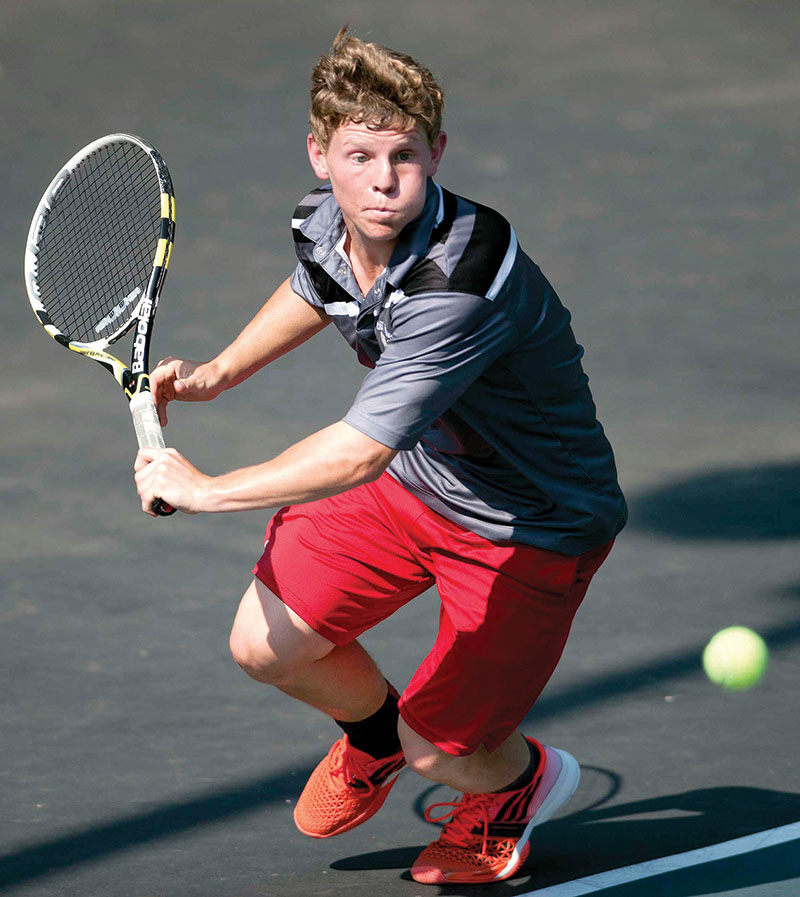 SALISBURY — There’s no clock in tennis, and East Rowan’s Chance Brown wasn’t going to be rushed.

Brown’s opponent, Dexter Bellingham, hit harder, but Brown was a wall of patience at No. 2 singles, stoically returning everything thrown at him. It took almost two hours, but Brown won 6-1, 6-1 and turned around Tuesday’s playoff match.

The bells chimed at Catawba shortly after Brown’s match ended. Brown’s doubles partner Ike Emerson and coach Jon Heidrick thought it was the 5 p.m. bells at first. Then it hit them that the bells were chiming 6 p.m., and they laughed.

Brown’s marathon win evened the match at 3-all after singles, and East Rowan went on to beat South Iredell 5-4 in a second-round 3A playoff matchup. The Mustangs (13-0) were in a fight and got their noses bloodied,  but they stayed undefeated.

East Rowan was in trouble early, losing at the lower seeds where it never loses.

“Usually, we know we’re in great shape if we can split at the top,” Heidrick said. “But South Iredell’s lower seeds played phenomenally well today. That spoke volumes about how good a team they have. They’re in a split 3A/4A league and they’ve faced quality opponents.”

Emerson played consistently and cruised at No. 1 singles (6-2, 6-1). Gordon Krause, who missed the first round of the playoffs with illness, won a 6-4, 6-3 struggle at No. 3 for the Mustangs’ other singles victory.

“I expected to play better today, but I was still a little bit sick,” Krause said. “Growing up in Germany, I played year-round, but I haven’t been able to do that here. I’m just trying to get back into my old shape.”

Emerson and Brown teamed for a dominating 10-2 win at No. 1 doubles to give the Mustangs a 4-3 edge.

“Chance is so quick that even when I hit a bad shot, he can recover and get it, and we can kind of reset the point,” Emerson said. “His quickness really shows up in doubles.”

Emerson turned in a sensational, shot-making match, and he and Brown, who changes personalities from calm to hyper when it’s time for doubles, may have set a world record for high-fives.

“During the regular season, we didn’t click like this in doubles,” Emerson said. “We were usually up 5-1 after singles, so doubles didn’t matter. But in the playoffs the matches have gotten tougher and we’ve become a lot more dependent on our doubles teams. If you don’t win doubles, you don’t advance.”

East Rowan’s No. 2 doubles team of Jeremy Price and Krause had the distinction of clinching the match when they prevailed 10-5 to set off a mini-celebration.

“You heard the clapping from our win at No. 2, and then we lost No. 3 doubles (10-8) just a few seconds later,” Heidrick said. “Matches don’t get much tougher than this.”

East Rowan will play in the third round next Tuesday.