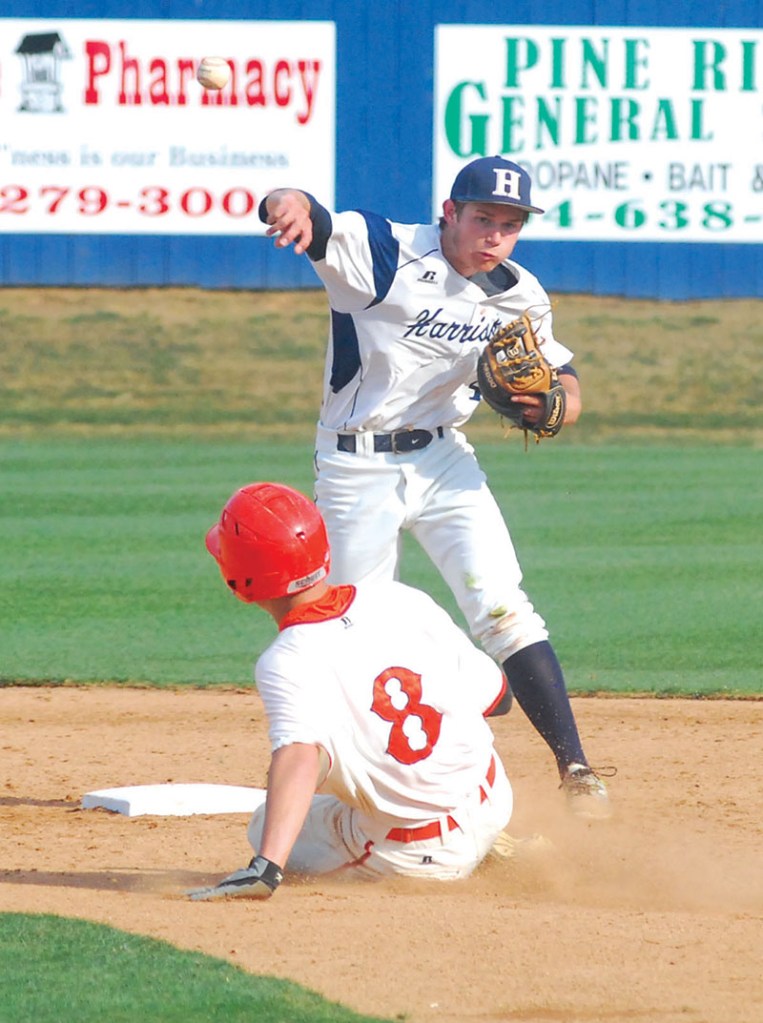 ADAM HOUSTON / SALISBURY POST Hickory Ridge's Jake Whitcomb (4) tries to turn a double play as Carson's Brandon Mock (8) slides into second in an attempt to break it up Wednesday in a South Piedmont Conference tournament semifinal game at Staton Field in Granite Quarry. The Ragin' Bulls topped the Cougars 6-4.

It was 4-4 in the top of the sixth, and the bases were loaded with two outs when Hickory Ridge catcher Jeremiah Boyd stepped to the plate against Carson hurler Owen White, who had just fanned cleanup hitter Chase Garofola.

White got ahead in the count. It was 1-and-2 when Boyd started fouling pitches off until he got something he liked.

“I was just thinking about putting it in play and thinking backside,” Boyd said. “And then I hit it right down the right-field line.”

Boyd slashed a rocket between Carson first baseman Heath Mitchem and the bag, and two Ragin’ Bulls roared around the bases to score. Boyd gave his team a 6-4 lead, and sixth-seeded Hickory Ridge held off second-seeded Carson 6-5 to advance to Thursday’s SPC tournament final.

“Boyd just had the game-winning hit against South Rowan last week,” Hickory Ridge coach Branden Knapp said. “That was just two good freshmen battling, and this time our guy came out on top.”

Both teams swung the bats with authority, registering 11 hits each. Both teams experienced defensive lapses, including a breakdown by the Cougars (16-9) that allowed Will Simoneaux to circle the bases on a basic single to right field.

“Normally we play pretty clean defense,” said Carson coach Chris Cauble after his team failed to turn key double plays and made four errors. “We didn’t play well defensively today, and it cost us. A lot of little things hurt us, but I can’t fault how we battled.

“We put ourselves in position at the end with the tying run at third. It just didn’t go our way.”

Michael Morrison had three hits and scored three runs for the Cougars. Heath Mitchem and Brandon Mock had two hits each.

Mock took the last swing of the game, flying to right field on a 2-2 pitch from John-Riley Hathcock after Carson had scored a run and filled the bases with the help of a two-out error.

“Hathcock did a great job of moving on to the next pitch after we made mistakes behind him,” Knapp said. “That’s what we preach doing. He got us a lot of groundballs.”

Carson trailed 3-1 early but scored twice on wild pitches and once on a throwing error to take a 4-3 lead after four innings.

“We missed chances to break it open early,” said Cauble, after the Cougars left nine on base. “The diving play their shortstop (Jake Whitcomb) made to end the fourth inning kept them in the game.”

Hickory Ridge’s three-run sixth decided it. After Carson handed the Ragin’ Bulls (16-8) three baserunners with shaky defense and a hit batsman, Greg Waslo’s flyball fell just fair down down the left-field line to plate the tying run. Two batters later, Boyd put his team in front on the last pitch White threw. White was relieved on the mound by Caleb Hall.

Boyd was the hero this time, but he and White will have more battles in the future.

“Credit our pitcher,” Boyd said. “Carson had a lot of men on base today, but he kept the ball down and he never got rattled. It was a great feeling to see that last ball go up in the air because I knew we were heading to the championship.”

In Thursday’s 7 p.m. championship game at Staton Field, Hickory Ridge and Cox Mill will battle for the SPC’s No. 2 seed for the 3A state playoffs. Carson is assured of being the SPC’s No. 3 seed. West Rowan will be No. 1. South Rowan, East Rowan and the Hickory Ridge/Cox Mill loser are likely wild-card teams.