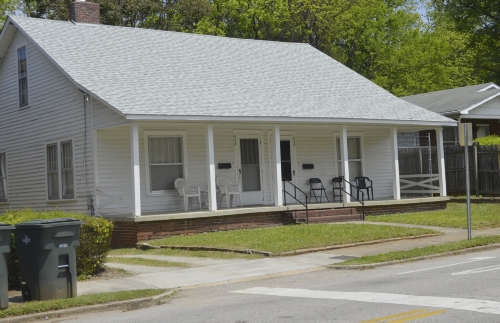 Kenneth Neely, 50, who resides in the duplex apartment on the right, was shot in the stomach early Wednesday morning following a home invasion. Neely said three masked men, one of whom had a handgun, kicked in his door and put a gun in his face while he was in his front bedroom. He tried to fight off one of the men and was shot by the other. The men took his wallet and cell phone. Shavonne Walker/Salisbury Post

Salisbury Police say a man was shot in the stomach early this morning following a home invasion at a Lincolnton Road duplex apartment.

Kenneth Neely, 50, told police he was in his bedroom in the 400 block of Lincolnton Road around 1:30 a.m. when three men with their faces covered kicked in the door.

Neely, who was treated and released at Novant Health Rowan Medical Center, said one of the intruders pointed a gun in his face and asked where Neely’s money was. He told the man where to get the money, and the gunman told another masked man to watch Neely.

The gunman said he was going to shoot Neely after they got what they came for, Neely told a Post reporter.

Neely said he thought to himself that, if he were going to be shot after he told them where to get his wallet, he wasn’t going to give up without a fight. He struggled with one of the masked men, and one of the other men shot him.

All three men left after Neely was shot, taking his cell phone with them. Neely managed to call 911 on his house phone and waited for help.

Police investigators looked through the home and found a shell casing in the bedroom, along with a hole in the wall they said appeared to be left by the bullet. Neely had little description of the men, who he said were black and had their faces covered.

An ambulance took Neely to the hospital, where doctors told him the bullet did not hit any vital organs. He was able to return home.

Neely says he has no plans to leave and won’t be a victim again.

He believes he was targeted because of the perception he has money.