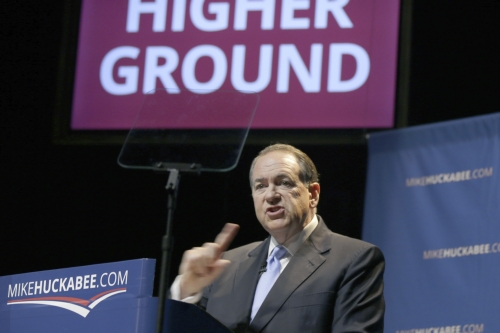 Tuesday was Mike Huckabee’s turn to make it official. What does history say about his chances?

Once the governor of Arkansas and more recently a talk-show host, Huckabee is one of three repeat candidates in the Republican presidential race for 2016. Texas Governor Rick Perry and former Pennsylvania Senator Rick Santorum ran in 2012. Huckabee skipped that cycle, but ran in 2008.

It’s possible to do better in a second race for a presidential nomination than it was the first time, even without acquiring new credentials along the way. Ronald Reagan, Bob Dole, John McCain and Mitt Romney all did so. That history is one reason I give Huckabee a real chance of winning, even though he isn’t a top-tier contender.

But Huckabee is trying something those candidates didn’t do. None of them skipped a contested cycle. So it’s worth looking at what happened to candidates who have tried that since the modern presidential nomination process began in 1972.

Jerry Brown ran in 1976 and 1980, when he was governor of California the first time, and then again in 1992. He kicked up some dust in late primaries after Bill Clinton had already knocked out his viable competition, but nothing more.

Al Gore passed on running in 1992 after winning a handful of primaries in 1988. He won the nomination easily in 2000, but of course that was after serving as vice president for two terms. Hardly a comparable case.

Dick Gephardt also took a break after running a solid but losing effort in 1988, returning in 2004. In the meantime, he had become the Democratic leader in the House. It didn’t help. He was a more serious candidate than Brown was in 1992, but failed to win a single state.

A third 1988 candidate, Joe Biden, waited two decades before jumping in again. In 2008, he at least made it to Iowa.

This isn’t an encouraging set of cases. All except Gore basically flopped after taking a break. On the other hand, Huckabee only waited eight years. The others all had longer layoffs.

Oddly enough, no modern candidate has run, skipped a single cycle and returned eight years later to try again. So Huckabee, at the bare minimum, will be at least a footnote in American political history.

In other words, not counting cycles in which an incumbent president wasn’t challenged for the nomination. So John McCain ran in 2000 and 2008, with no contested cycle in 2004 because George W. Bush was running for re-election. One more case, George McGovern, is a bit different, since he won the nomination in 1972 before trying again in 1984 and drawing very little support.