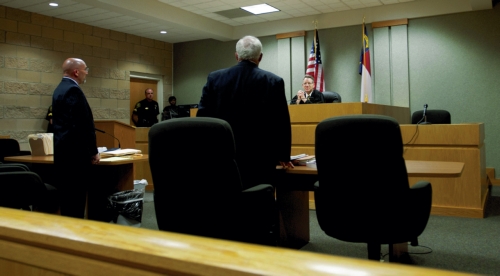 A hearing regarding the alleged neglect of a horse between Salisbury attorney Robert Inge and Highland Hill Stables owner Lisa Young has been continued to today.

Inge and his wife, Tracy, say they gave their horse, Cee Mee Streak, to Young nearly a year ago because the animal wasn’t being ridden very much at their home after their daughter went off to college. The Inges recently saw pictures of a thin Cee Mee Streak and demanded Young let them get him back.

Tracy Inge said the horse was healthy when they gave him to Young in June 2014. The couple say Young refused to return the horse or let them retrieve the animal.

Tracy and Robert Inge say they entered into an oral agreement with Young, but they still maintained ownership. When Young refused to return the horse, Robert Inge filed a court order on April 29, restraining Young from possessing the horse.

The Inges say Young breached that oral contract to provide appropriate care of the horse, which Young has denied in court filings.

Young also says in court documents there was never an oral contract between she and the Inges. Young said the horse was ridden mostly by children a maximum of eight hours per week and he’d slowly been taken out of rotation.

According to an affidavit filed by Young’s attorney Ed Ferguson, Young said she refused to give the horse back because he was given to her. Young further said she told Tracy Inge that she wanted to find out what was wrong with the horse and fix it.

On April 30, Robert and Tracy Inge, accompanied by a Rowan County Sheriff’s deputy arrived at the Old Mocksville Road facility to get their horse, which was released to them.

According to Young, veterinarian Dr. Jay Moore told her the horse needed to put on weight but wasn’t in danger of dying.

The vet also ran tests on the animal, went over the new feed Young had bought and adjusted the grain and supplement amounts, the affidavit said.

According to Moore’s tests, the horse had parasites, which he was being treated for by the vet, and needed exercise.

Rowan County Animal Control officer David Yaninas checked the horse out after receiving complaints from Tracy Inge. According to Inge, the officer found Young “failed to provide the animal with veterinary care when needed, to prevent suffering.” He also indicated to Inge he filed charges against Young for animal cruelty. There are no court records as of late Wednesday that indicate Young was charged or issued a citation.

According court documents, Young said the officer told her the issue was “blown way out of proportion” and the animal was thin, but not about die.

Young wants the temporary restraining order dissolved, her attorney Ed Ferguson said in court Wednesday morning, during a hearing that was expected to occur.

Chief District Court Judge Charlie Brown recused himself because he’s presided over cases for Inge and Ferguson and prior to being appointed judge, he worked as an assistant district attorney in the same office as Lisa Young.

A visiting judge is expected to hear the case at 9:30 a.m. today.