Center for the Environment speaker encourages community to ignite change 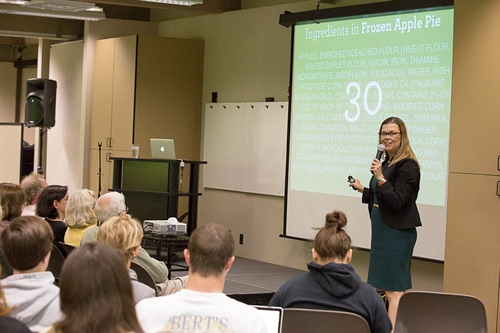 In a world where we are constantly bombarded with chemicals, how do we stay healthy?

Heather White, executive director of the Environmental Working Group, spoke on ways to navigate the tricky waters of the modern-day food industry recently at the Center for the Environment at Catawba College.

The Environmental Working Group estimates that there are more than 80,000 food products on the market containing more than 10,000 chemicals.

People tend to think of the environment as something removed from themselves — national parks or places to go camping — but the environment isn’t somewhere you go on vacation, White says. It’s right here, right now. It’s what you eat, the air you breathe, the water you drink, what you put on your skin — everything that we surround ourselves with counts as the environment. And currently, it’s being polluted.

The Environmental Working Group has a list called “The Dirty Dozen” that keeps track of which foods are exposed to the most pesticides and herbicides. For instance, the group has discovered that a single strawberry can carry traces of up 54 chemicals. And the rise of GMOs — genetically modified organisms — is only adding to the problem, White says. While the Environmental Working Group can’t comment on the rumored health impacts of GMO foods, they are heavily concerned about the environmental aspect of the debate.

“It is unquestionable the impact GMOs have on the environment,” she said.

The EWG reports a 583-million-pound increase in the use of herbicides in the past 12 years linked to GMO crop growth. She explained that GMO farmers will grow crops that have been modified to be resistant to weed killer. But eventually, the weeds become resistant, and farmers must use a more toxic herbicide — which means a new crop of resistant GMOs. And the cycle repeats, getting steadily more toxic.

“We have a chemical treadmill that we just can’t get off,” White said.

Antibiotic use in the meat industry has also caused a rise in antibiotic-resistant bacteria, including salmonella and E. coli, White says. The industry uses antibiotics to help animals grow faster and fatter and to shortcut providing sanitary conditions.

It seems like a lot of this wouldn’t make it past the FDA or the USDA, but White explained that the United States actually has very little legislation regarding toxins. In fact, the operating principle for most manufacturers is to put it on the shelf first and conduct health and safety tests later — if they bother to conduct them at all. And clauses like “Generally Recognized as Safe” mean that companies can sneak in minute amounts of chemicals or ingredients without having to list them on the label. This can be deadly to certain populations, and it means that if there’s a chemical, spill-supervising agencies are often left scrambling for information.

“At the very basic level,” White said, “we need to know what we’re doing.”

In 2004, the Environmental Working Group conducted a series of studies to illustrate that modern humans are exposed to industrial-level pollutants before we’re even born. In the study, blood samples from newborns revealed a cocktail of toxins including BPA, parabens, and even DDT.

“This is the reality of our modern-day life,” White said.

And it’s having a negative impact on health. In recent years there’s been a staggering rise in obesity, food allergies, autism, pediatric cancer and early onset puberty. Furthermore, recent studies have revealed that one in two Americans will be diagnosed with some form of cancer within their lifetime.

But it’s not all bad news. Kraft and Hershey’s recently announced that they were doing away with certain dyes or artificial coloring as well as artificial preservatives. The Chipotle restaurant chain has pledged to use all non-GMO ingredients, and McDonald’s had a horrible business quarter as more people made better eating choices.

In addition, the young Millennial generation is turning toward healthier, better and fresher food. And obesity rates have flat-lined as eat-better-move-more campaigns took hold.

But there are still battles to fight, White says. America’s toxin laws haven’t been updated since 1976, and are long overdue for an overhaul. The Farm Bill still needs some tweaking; and while organic farms are on the rise, there are too few of them, according to White.

The good news is that there are lots of ways to get involved. It’s as simple as petitioning companies to label food properly or reaching out to farming communities and encouraging them to specialize in fruit or other vegetables instead of GMO corn destined to become ethanol. And communities these days are full of food advocates — it’s easy to connect with them and ignite change in your hometown. All you have to do is look, White says.

But sometimes it’s best for change to start in your own home, at your own dining room table. White suggested eating less meat, and when you do, make sure it’s greener. Buying a water filter can cut down on metals, BPA and pharmaceuticals that make their way into drinking water. White also recommends throwing out non-stick pans and switching to cast iron. And you can buy organic to help cut back on chemicals and toxins that may slip into your food. The EWG has several free apps for iPhone and Android to help people shop well and affordably when it comes to organics.