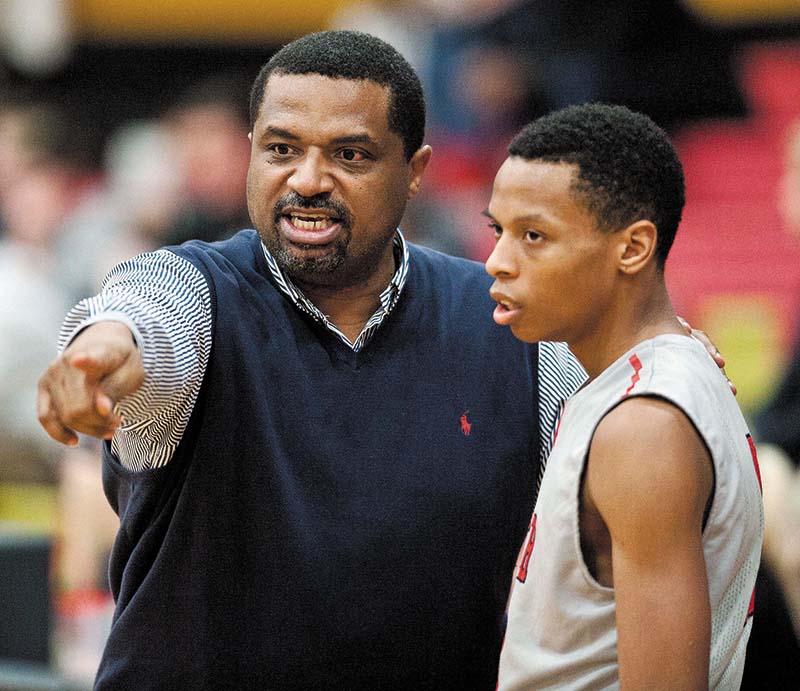 JON C. LAKEY / SALISBURY POST Bryan Withers (left) talks with South Rowan's Tireek Wilder (right) Jan. 6 in a nonconference game at Salisbury. Withers was announced on Tuesday as the next head coach at Salisbury, taking over for Jason Causby. Withers coached at South Rowan for the past three seasons. He graduated from Salisbury in 1988 and played a key role in the Hornets' run to the 1987 2A state basketball championship.

SALISBURY — In 1987, Bryan Withers dunked a lob at the Dean Smith Center that propelled Salisbury High to a victory over Farmville Central, the first 30-win season in Rowan County hoops history and a 2A state championship.

The Hornets were struggling against Farmville Central when Withers finished the play. They aren’t struggling now, but principal Luke Brown views Withers as the guy who can elevate the program the way he once elevated in the gym.

Withers officially came home Tuesday when he was announced as Salisbury’s new boys basketball coach. He is the replacement for Jason Causby, who was 157-111 in 10 seasons and led the Hornets to more than their share of Central Carolina Conference and Sam Moir Christmas Classic championships.

“I can’t even explain how excited I feel,” Withers said. “This is a job I wanted quite a while ago, but they went with Jason, and he did a great job for them. I’ve got no regrets about anything. I’ve been given an opportunity now, and it’s a dream for any coach to go back to his old neighborhood. I’m proud Salisbury High has faith in me.”

Brown said in a press release there were 60 applicants for the position. The rumor mill linked several high-profile coaches to the job, but the Hornets were most impressed by Withers.

“We worked very diligently throughout the process to select the top candidates to be interviewed for this position,” Brown said. “Bryan impressed us with his basketball knowledge, willingness to help the school in whatever capacity, and understanding of our students.”

Withers has maintained close ties to Salisbury. His daughter, Lora, is an all-conference volleyball player for the Hornets and will be a senior next season.

“It’s going to be nice to be able to see all of her games,” Withers said.

Withers coached at a number of levels. He’s been an AAU coach, jayvee coach, varsity assistant and varsity head coach. He’s spent the past three seasons as the head coach at South Rowan. The Raiders haven’t been overly successful (27-45), but they had their moments during Withers’ tenure, including a 2014 Sam Moir Christmas Classic upset of Salisbury.

Unlike most new coaches, Withers isn’t entering a rebuilding situation. Salisbury hasn’t been able to beat North Rowan in recent seasons, but the Hornets have been tough against most opponents. Three Salisbury juniors — DeShawn Troutman, D.J. Alexander and Wes Fazia — made the All-Central Carolina Conference team. The program has depth, talent and size.

“There’s a really good class of rising seniors,” Withers said. “It’s just a matter of doing the little things right and playing team ball. If we do those things, a lot can fall into place for those guys. If they get the job done on the court and in the classroom, they should get opportunities.”

Withers, once part of 37 straight wins at Salisbury and back-to-back 30-2 seasons, conducted an open gym at South Rowan on Tuesday — fulfilling a commitment — but he’s eager to get started with his new guys.

“It will be bittersweet in leaving South Rowan because I’ve had great learning experiences,” Withers said.  “I’m leaving when exciting changes are going on at South, but I’m going back to a place that is also making great changes.

The staff is looking forward to working with Withers as well.

“We’re excited to have Bryan come home,” athletic director Dale Snyder said. “His knowledge of our community and our athletes will make him a tremendous asset, not only to our basketball program, but to our athletic program as a whole.”