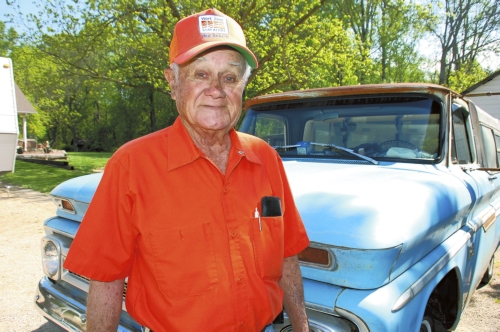 Mark Wineka/Salisbury Post Hubert Elliott, who will be 84 Wednesday, retired last week as the oldest state employee in North Carolina. He was a truck driver for the DOT in Rowan County.

The always-working Hubert Elliott is retired — for now

CHINA GROVE — You get the sense Hubert Elliott will go stir crazy.

He officially retired last Friday as the oldest state employee in North Carolina and the third oldest in the country. The folks at the N.C. Department of Transportation looked it up.

Come Wednesday Elliott turns 84, and this sun-baked man of grit and iron refuses to say his working days are through.

“I might take another job, if something pops up,” he says.

Elliott has been working all of his life, from his days of picking cotton, to toiling in the No. 6 Weave Room at Cannon Mills, to cooking in the Air Force, to running a China Grove service station, to driving tractor-trailers across country, to driving big trucks for the DOT.

He also has cut hair, run a cafe and worked in a bowling alley.

What keeps him going?

Elliott already was 67 when a friend cajoled him into going to work full time for the DOT maintenance department in Rowan County, and he stayed on the job for 16 years, three months.

He can tell you the approximate mileage he put on each truck in the local fleet and figures he logged 260,000 road miles over the years. That includes running one of the state snow plows in the winter.

Leading into his official retirement day Friday, the state owed Elliott some personal days, so he was trying to find things to keep him busy around his house on Shue Road. He and Hazel, a beautician of some note, built this house in 1957.

Elliott washed windows one day and helped to plant a garden the next. He mowed for hours and piddled around his old cars and trucks. He takes a lot pride in his 1968 Plymouth Fury, which he bought new, and a 1966 Chevrolet pickup, which could stand some tuning up.

But you still get the feeling Elliott wants to be busier.

Elliott  grew up as the third of five children in his family. His father farmed full time until he got a job at Cannon Mills’ Plant No. 1 in Kannapolis. Elliott remembers planting and picking cotton with his father and always working in the family’s vegetable garden.

The job of helping to raise his baby brother, Carl, fell to Elliott when his mother also went to work in the mill. He learned how to keep house and cook before quitting high school and also going to work for Cannon Mills.

Hubert and Hazel met on a blind date and were 17 when they married on Christmas Day 1948. In 1952, Hubert was drafted into the Army, and while he was waiting 30 days to report, he kept bugging the local Air Force recruiter to allow him to enlist.

The recruiter told him he was the 18th man on his list, and he could only approve three. But Elliott persisted. One morning not long before he was set to enter the Army, Elliott stopped by the local Texaco station, where the recruiter had left word for him be at the Salisbury post office at 6 the next morning if he still wanted to join the Air Force.

Elliott went through basic training in San Antonio, Texas, and though he wanted to be a mechanic, the Air Force placed him in food service instead and sent him to Biloxi, Miss.

“I had been in the kitchen with Mama,” Elliott said. “I had a general knowledge of what was going on.”

The Biloxi base had 18 instructors teaching the new cooking recruits, and Elliott learned everything from making meals for whole chow halls to preparing in-flight lunches.

He eventually was sent to Orlando, Fla., and when he wasn’t cooking for airmen, he was setting up pins in a downtown bowling alley and living off base. His Air Force schedule eventually gave Elliott time for an outside job at a local cafe. He worked night shifts and handled everything — waiting on customers, running the grill and washing dishes.

Hazel traveled south and lived with him for a while, but when he was shipped off to Alaska, she returned home. For one-and-a-half years, he didn’t see Hazel and tried to find ways to keep busy in his remote post along the Yukon River.

Hubert fished a little bit in a homemade boat. He also tried his hand at cutting hair for 250 men.

“I had a good general idea how to go about it,” Elliott said.

He charged 60 cents a haircut. The barber shop received 10 cents of that, and he pocketed 50 cents. The California men who came in insisted on paying $6, the going rate they were used to back home.

“That was big money,” Elliott says.

Toward the end of his stint in the Air Force — he was in from 1952-56 — Elliott’s superiors gave him a chance to travel with a USO show. “I was free just to ride along,” he says.

He became fast friends with country  singer-guitarist Roy Clark, destined for fame later as one of the hosts on television’s “Hee Haw.”

Elliott and Clark took a trip together to Nome, Alaska, which in those days still had dirt streets and board sidewalks.

With Clark carrying a guitar on his back, the men hit three or four bars, and at the last stop, someone asked Clark to  play a certain song. Then another request came. Elliott said the crowd turned off the jukebox, and for the next three-and-a-half hours, Clark played his guitar and sang until he was hoarse.

That’s something you don’t forget.

When his time in the Air Force was up, Elliott had 90 days to re-enlist and claim a bonus. He allowed the time to run out and went back to work in the mill. In all, Elliott calculates he worked about 19 years in the No. 6 Weave Room at Cannon Mills.

Again, one job wasn’t enough. In addition to the second-shift job at Cannon, Elliott also worked mornings and Saturdays for the Wise brothers (Bill and Gerald). “Two good boys,” he says.

A partnership with Joe Morgan came later, and Elliott ran the service station at 509 N. Main St. in China Grove for about 20 years.

The next working adventure came in trucking. He drove cross-country routes all the way to California for Schneider before being assigned to a dedicated run between Charlotte and York, Pa.

“We made good money,” Elliott says, remembering times when he made $1,450 a week with a $900 monthly bonus for driving safely and being on time.

He drove about seven years and was away from home a lot. “I had to mow and keep this place going,” Hazel says.

The DOT job came when most folks would be well into enjoying retirement.

Hubert and Hazel have a daughter, Darlene, to go along with five grandchildren and eight-great-grandchildren.

Hazel is a story in her own right. She went back to high school and graduated while Hubert was in the Air Force. She worked several years at First Union Bank in China Grove before going to beauty school and opening her own shop at the house on Shue Road.

She’s still doing the hair of longtime customers and just trying to stay out of Hubert’s way.

1. Where does Rowan County’s unemployment figure stand, as of the last state report? A. 5.6 percent B. 7.1 percent C.... read more