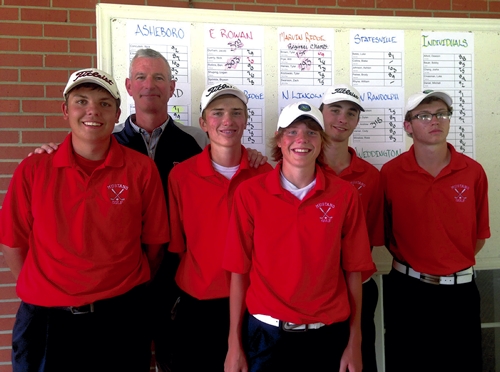 The Mustangs tied with Waxhaw Cuthbertson on Monday at the Club at Irish Creek, in the 3A Midwest regional, earning a spot at next week’s state tournament in Southern Pines.

“At the beginning of the season, I knew we had a chance [to make it to the state tournament],” East Rowan’s Nick Lyerly said. “Now we’ve got the regional, and we’re going to states. It’s awesome.”

Waxhaw Marvin Ridge won the team title with a 293, the only team score under 300. Cuthbertson and East Rowan were not far behind with a pair of 303s. The Mustangs wound up on the wrong end of a tiebreaker, and the Cavaliers took home the runner-up trophy.

“Today, it was a good showing,” East Rowan coach Rhett Teems said. “It probably wasn’t one of the best scores we’ve shot this year, but we come out of one of the toughest regionals in the state. You can look at the scores and tell that for individuals.”

The 3A state tournament is May 11-12 at Longleaf Golf and Country Club in Southern Pines.

Lyerly led the way for the Mustangs with a 1-under 70. He was 2-under through 12 holes, but a double bogey on the par-five 13th knocked him back to even par. He hit a pitching wedge close on the par-four 16th and made the birdie putt to get to 1-under on the day.

“I was disappointed [on the 13th hole] because you need to give yourself a look at birdie, but I still had golf to play and needed to come back solid,” Lyerly said.

Logan Shuping had the second-best finish among the East Rowan golfers with a 5-over 76, and Bryson Sprinkle was right there with a 7-over 78.

There were a tense couple of minutes outside the Irish Creek clubhouse as everyone waited to see the score posted by Jacob Durham. East Rowan had a 224 on the board with three scores posted. Weddington was in the clubhouse in third place with a 308. Shuping said everyone knew it was going to be close after looking at other teams’ scores.

Durham finished with an 8-over 79 to clinch the Mustangs’ berth at the 3A state championship.

Cress won after the first round of the playoff on the par-three 18th. Brown and Daniel duked it out on the finishing hole until Brown sealed second place with a par.

Richards’ round was anything but easy. He bogeyed the third, fourth and ninth holes for a 3-over score on what he said was the easier nine.

“I was pretty upset,” he said. “But that was one of the things my coach, my mom and dad always told me, ‘You can’t ever give up.’ So I kind of had that mentality.”

Richards, the South Piedmont Conference champion, rebounded on the inward nine. It started when he rolled in a 25-foot birdie putt on the par-four 10th. He picked up birdies on the 14th and 15th holes to get back to even.

This will be his third straight trip to the 3A state championship. He qualified as an individual in 2013, and the Raiders advanced out of the region as a team last year.

“It feels good [to make it to the state tournament], but it hurts for the team because we missed it by seven,” Richards said. “…It kind of stings that we didn’t make it.”