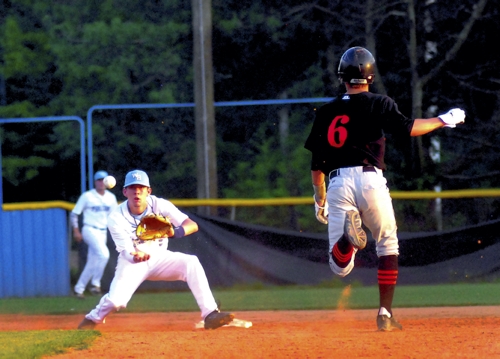 Adam Houston / Salisbury Post West Rowan's Jeremy Simpson eyes the ball as he waits to tag out Northwest Cabarrus' David Grimm (6) at second base on Monday in a South Piedmont Conference Tournament game at Mount Ulla. The Trojans upset West, 4-3.

MOUNT ULLA — The lead float has dropped out of the South Piedmont Conference parade.

“It’s unfortunate,” outfielder Harrison Baucom said after West (17-6) had its eight-game winning streak curbed. “We played bad baseball. At the end of the day, all that matters is the number you put in the runs box.”

West had as many errors as runs against Northwest (6-15), which earned a semifinal berth against Cox Mill Wednesday at Staton Field. The Trojans rode the glow-in-the-dark bat of first-baseman Tim Furr and the elastic right arm of winning pitcher Alex Rodriguez to a win that temporarily alters the SPC landscape.

“I know they made some mistakes,” said NWC coach Joe Hubbard. “But we put ourselves in situations where we could execute. It would have been easy to tuck our heads and go home, but we’ve adopted a ‘Why Not Us’ attitude. We decided to go out and play with our hair on fire.”

Furr had the game’s loudest hit, a towering two-out, two-run homer that cleared the imposing left-field wall and provided a 4-1 lead in the top of the fifth. It came on a 2-2 curveball from lefty Bryan Ketchie, just moments after an infield error extended the inning.

“I was worried this might happen,” said West coach Seth Graham. “We just didn’t show up to play. You make (three) errors against any team, it’s gonna be hard to beat them. We were flat in BP. Plays we’ve made all year, for some reason we didn’t make them tonight.”

Ketchie, a junior, was a bit of a hard-luck loser. He allowed five hits in five innings, never retired more than four straight batters and committed a third-inning error, but worked out of trouble in the first and fourth. Northwest took a 1-0 lead on Jake Crowder’s groundout in the second inning and went up 2-1 an inning later when Carson Allman reached on an error and scored on a 35-foot infield hit by DH Adam Barrows.

When Furr’s blast left the yard, it took much of the Falcons’ chance of sweeping through the tournament with it. “No one should be scared of us,” said Baucom, who delivered West’s first run with a bases-loaded walk and scored its third on Kacey Otto’s seventh-inning groundout. “But we’ve got to play better. We’ve got to play the game the way it’s supposed to be played. That’s what wins games.”

This one was won by Rodriguez, a right-hander who was shelled by West in an 11-1 loss earlier this spring. This time, he relieved in the last of the second inning and scattered five singles, struck out five and walked none. “He focused on the outside corner,” Baucom said. “We’ve struggled with that all season.”

West squandered a number of early opportunities, leaving seven runners on base — five in scoring position — over the first three innings.

It hardly mattered to Northwest, which enjoyed a well-deserved post-game celebration. “This is great for our team,” beamed Hubbard. “In seven of our games we’ve been ahead, tied or down by one run after the fifth inning and haven’t been able to finish teams off. Tonight we did.”