Intimidators Baseball: Curley making most of return to Kannapolis 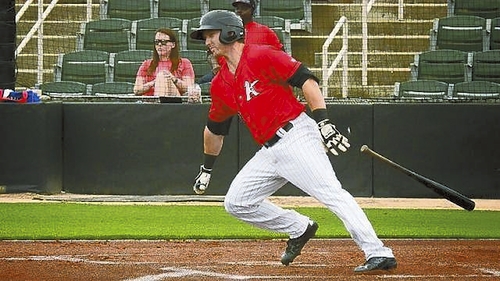 KANNAPOLIS — The Rome Braves are in town, a reminder to Kannapolis Intimidators slugger Chris Curley that time marches straight ahead, even though his own baseball career has moved in a circle.

Curley played in the South Atlantic League for Rome way back in 2010. Randy Ingle managed Rome in 2010  — and still does.

“It’s been great to see my old coaches,” Curley said. “But not what you’d call the best of circumstances.”

Curley is 27 years old — 28 in August. He’s ancient for Class A ball, but don’t get the idea he can’t play. He has been the MVP of a professional league. He has batted .286 in a full season in Double A. He’s the best run-producer the Intimidators have. He can play third base, second base and first base smoothly, and he could handle shortstop in a pinch.

Curley is a victim of the strange twists pro baseball takes. He never dreamed he’d be in Kannapolis now, but he’s making the best of each day with a a stoic smile and a powerful swing.

“Goofing around with the younger guys keeps me young.” Curley said. “Playing baseball is a good job. It beats sitting behind a desk.”

Kannapolis manager Tommy Thompson sits behind a desk some. He peeled a healthy lunch of fruit on Sunday afternoon and chatted about Curley.

“With the things he’s accomplished, with what he’s proven at higher levels, Chris shouldn’t be here right now, and we know that,” Thompson said. “I’m sure he’s disappointed he’s here, but he’s a class act. He never takes disappointment on the field, on the bus or in the locker room.  I hope the younger guys are watching him and learning from him because he carries himself as a professional.”

Curley’s father (William) got him started back in Kentucky. He was an all-around athlete, a 1,000-yard running back, a dominating pitcher and a .524 prep hitter. His bat opened the door to college athletics. He was a terror at Campbellsville, a small NAIA school in Kentucky. He walloped 37 homers. He was conference player of the year.  He was an All-American.

Following his junior year at Campbellsville in 2009, Gurley wasn’t drafted, but MLB teams held tryouts after the draft. He attended Kansas City Royals’ and Atlanta Braves’ tryout camps. The Braves signed one guy from the Kentucky tryout  — Curley.

“They liked me as a shortstop,” Curley said.

Before the 2009 season was over, Curley had made his pro debut with Atlanta’s rookie league team in Danville, Va.

In 2010, he played for Danville, Rome and the Braves’ advanced Class A team in Myrtle Beach. His teammates included talented teenagers Julio Teheran and Christian Bethancourt, now a potent battery for the big-league Braves, working together to shut out Cincinnati, 5-0, yesterday.

“They were good guys,” Curley said. “It’s cool. I see them playing for Atlanta and I’m very happy for their success.”

Curley batted .224 with the Braves and was released after the 2010 season.

That might have been the end, but an independent pro team, the Florence Freedom, played near his hometown in Ft. Mitchell, Ky. Curley starred for the Freedom in 2011, batting 292 with 14 homers.

“I still didn’t get offers, and that was the closest I came to getting out of the game,” Curley said. “The only reason I went back to Florence for a second season was so my dad could see me play.”

In 2012, Curley was raking for Florence — 44 RBIs in 42 games  — when a  scout spotted him. On July 5, 2012, the White Sox purchased his contract. The organization needed a third baseman. They assigned Curley to Kannapolis.

Josh Feldman, “Voice of the Intimidators,” recalls that in his first at-bat in Kannapolis, Curley launched a long home run.

“He made a great first impression,” Feldman said.

Curley flourished in Kannapolis, belting 11 homers in 49 games. By the end of the 2012 season, Curley was starting at third base in the Carolina League playoffs for the advanced Class A Winston-Salem Dash. Thompson was his manager.

The 2013 season was the pinnacle for Curley. Playing for Winston-Salem, he smacked a league-best 24 homers and led the league with 92 RBIs. He was named Carolina League MVP.

“I stayed healthy, missed only about two games all season and got into a rhythm,” Curley said.

In the winter after the 2013 season, Curley played for the Indios de Mayaguez in Puerto Rico’s Winter League. Curley batted third, at times, against big-league hurlers. Many of his Indios teammates, including former Catawba slugger Jerry Sands, have spent time in the majors.

Curley played the entire 2014 season for Chicago’s Double A team in Birmingham, Ala. He only homered five times for the Barons, but he batted .286 while mashing 31 doubles. He was third on the team in runs scored and RBIs. He more than held his own.

“In Double A  there isn’t anyone who doesn’t belong and the pitchers have control as well as great arms,” Curley said. “My homers were down, but I’m a gap hitter and we played in a big park.”

Last December, the  Los Angeles Angels of Anaheim selected Curley in the Rule 5 Draft, seeing him as a potential solution to a hole at second base. It appeared to be a wonderful opportunity for Curley. He shined in spring training in Tempe, Ariz.

“I had my best spring training ever,” Curley said. “I knew I wouldn’t break camp with the big club, but I was hoping for Triple A or at least Double A.”

Instead, he was released three days before the start of the 2015 season. The timing wasn’t great. Rosters were set.

Curley was jobless less than an hour. When he informed former teammates of the bad news, word traveled quickly to White Sox management. The White Sox rosters at the upper levels (Charlotte, Birmingham and Winston-Salem) were set, but there was room for Curley in Kannapolis. The organization welcomed him back.

“I’ve told Chris unless there’s a rainout, we’re going to run him out there every day at third base, first base or DH,” Thompson said. “We’re going to wear him out. I’d be a pretty dumb manager if I didn’t play him. He can change a game or give us control of a game with one swing.”

Besides providing a great example for the youngsters with his work ethic, Curley leads the Intimidators in homers (5), doubles (9) and RBIs (20).

Curley could be gone tomorrow if an infielder in the minor-league chain gets hurt. Or he could be in Kannapolis another month or two. Thompson will relish writing Curley’s name in the cleanup spot on his lineup card every day that he can.