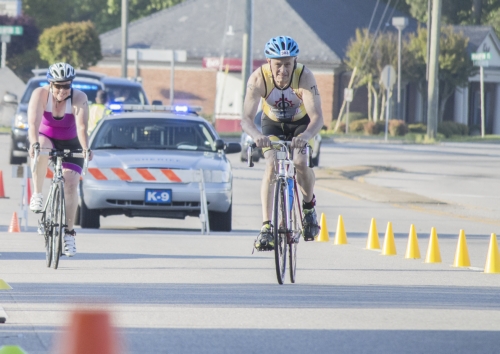 Up earlier than most, close to 100 people on Sunday swam, biked and ran to the finish line of the the sixth-annual Buck Hurley Triathlon.

The race began at 7:30 a.m. in the J.F. Hurley YMCA’s lap pool. The pool portion was a 300-yard sprint. Contestants worked their way to the end of the lap pool before sprinting out to several racks of bikes.

A crowd of spectators cheered triathlon participants as they raced out of the YMCA. Undoubtedly one of the most enthusiastic spectators was Ester Marsh, the race organizer and associate executive director of the Hurley Y. As Marsh hurried around the course, she stopped to cheer on nearly every competitor she passed.

“Let’s go. Get on it. You’re gonna get ’em,” she said, encouraging a triathlon participant heading out on the bike course. “I do get excited, but I know half of the people so it easy to cheer them on.”

Some dried off from the just-completed pool swim. Others simply hopped on their bikes and zoomed off for a 10-mile ride that  included Jake Alexander Boulevard, Statesville Boulevard and Brenner Avenue.

The final leg in the race was a 5K sprint.

Runners and bikers, Marsh said, typically have trouble with the swimming portion. Top swimmers typically are challenged by the bike race, Marsh said.

She said the most important thing to remember is not to judge a competitor by his or her condition.

Derek Kidwell, a Mooresville resident, finished the race first and also took home first place overall with a time of 48:07. Kidwell was just shy of beating the triathlon’s top time last year of 47:53.

Parks said he’s participated in the Buck Hurley Triathlon since its first year. Parks said he typically starts training a few months early for the competition.

Both Parks and Kidwell said good eating habits were a factor in training. Parks joked that he and Kidwell probably ate more than a typical person because of calories burned during training.

Over 100 people participated in the YMCA’s weekend events, which also included competitions for children. Some of the participants competed in teams.