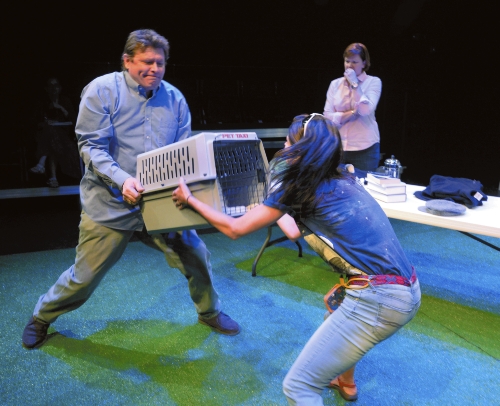 Brian Rassler and Amber Watson fight over a cat during the yard salein a rehearsal for the 10 minute play, "Lonely Socks Club" that will be presented the Lee Street Theater during the "7th Annual 10 Minute Play Festival." photo by Wayne Hinshaw, for the Salisbury Post

The plays being performed are “Dickie & Eleanor” by Len Clark, “The Green Room” by Josh Elicker, “The Lonely Socks Club” by Katie Scarvey, “Yard Sales Start at 7” by Marla Brown, “Weeding” by Jenny Hubbard, and “Seems Trustworthy” by K. Daniel Brown.

Part of Lee Street theatre’s mission is to promote new works. The 10-minute play festival is the perfect platform for featuring new plays as well as engendering collaboration as actors and directors don’t have to commit to a full-length project and the material can be revised in rehearsal.

“Directing something that has never been on stage before is very freeing and honestly sometimes feels like a more creative process because I’m helping to develop the script, too … I’m crafting a strong piece as I go,” said Andy Rassler, who is directing four of the six plays. Lee Street theatre has featured some of Rassler’s 10-minute plays and a one act, but this is her first time directing at Lee Street.

Even though the plays themselves are shorter, that doesn’t mean that any less work is put into them. Rassler says that working on the plays “is less all-encompassing and time consuming, but more dependent on detail … it’s like crafting a poem rather than a novel. Fewer words, but each word has to be exactly right, or it doesn’t work.”

“People should come because this is very local, very genuine, and very real.  It’s not old, dead, or distant playwrights…these creators are your neighbors, people you know. And they are very clever and funny!”

Tickets are $15 plus tax and available online at leestreet.org/tickets or by calling 704-310-5507. All performances will be at the Lee Street Theatre and Performing Arts Center at the Tom and Martha Smith Event Center, 329 N. Lee St.