Wayne Hinshaw: Hotel with a view 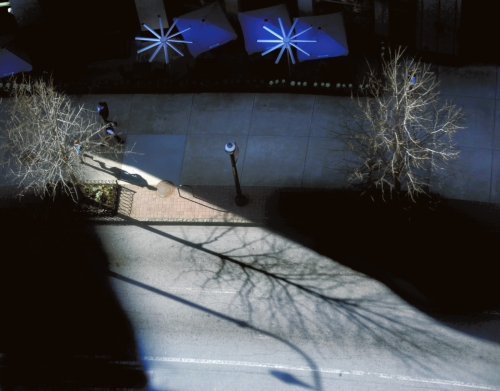 Sunlight peeps between the tall buildings to light only a small streak of the sidewalk but it caught a shadow of a pedestrain walking under a tree. photo by Wayne Hinshaw, for the Salisbury Post

On a trip to Atlanta, I had the fortune of staying in a room on the 20th floor of a hotel on Peachtree Street with a great view looking down on the world below.

Now growing up in Randleman where the tallest “skyscraper” was a two-story building, this 20th floor view was special. When I came to Salisbury years ago and saw The Plaza building (formerly the Wallace Building) with its multi-stories, I thought I was moving up, literally. The Plaza is an anthill compared to a 20-floor hotel room for me, a “down to earth” keep-your-feet-on-the-ground man.

Visually, I was captured by the changing light on the buildings below. The late afternoon sunbeams had a way of slipping between other tall buildings, making strange shadows on the sidewalk. Sometimes the light would be only a single streak of sunlight. Wow!

I noticed that the reflections on the glass front of a second-story building across the street picked up the distorted view of the pedestrians walking on the sidewalk below them. The curvature in the glass made a surreal view of the scene. Oftentimes, the best photographs are interesting because they require the viewer to use some effort of interpretation of what the photographer was seeing when he made the photo.

Looking almost straight down, the pedestrians became part of a scale model of shapes, designs and architecture. If you have ever viewed a model train setup with the small buildings to the scale of the train, you get the idea of the view, but this time it was real.

Maybe to you there was nothing spectacular about the view. However, I could see the details, the moments, the changing beams of light in a strangeness all of its own, making it special only to my eye, with a touch of not being exactly reality for that split second in time.

When I looked straight across to the apartment building in front of me, the architectural design again caught my attention with the blue color and the straight horizontal and vertical lines of the structure. The red chair on one balcony added that touch of something different to the view.

Why would I be so infatuated with such a simple view in life?