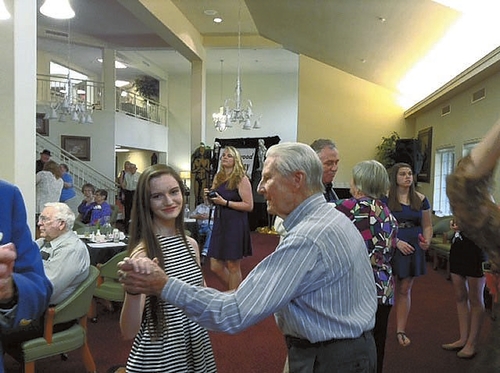 Is it really possible to have too much fun? Oak Park Retirement residents had a blast recently with a huge assist from Catawba College, West Rowan and East Rowan High School students.

Oak Park was certainly the place to be as the community came together to honor the residents with a night to remember while the dining area transformed into a happening dance floor. As the East Rowan Swing Band and DJ David Barrier provided dance tunes from the 1940s and ‘50s, Catawba College basketball and volleyball players and cheerleaders joined with West Rowan High School students to encourage residents to hit the dance floor.

Harris Teeter donated roses for the tables and Salisbury Flower Shop made corsages for the attendees. West Rowan students had raised money through band director Daniel Trivette to purchase 100 corsages.

Catawba and West Rowan High students had to practice the corsage pinning. When one of the students said, “I’ve never pinned a corsage in my life,” Master of Ceremonies Rachel Gallup initiated instruction and practice before the pinning began.

Swing band director Emily McNeil was excited to bring her band to Oak Park for the evening, but so were her students. She said, “I think a lot of them are more excited about being here than they were for their own prom.” Senior Jacob Daye, soon to be headed off to N.C. State for more studies in music, added, “It is a great opportunity for our band to showcase what we can do. It’s especially nice to give back to the residents here. They have been giving to this community for way longer than any of us have been alive.”

Early in the evening, residents were encouraged to vote for their own King and Queen of the Prom. Voting continued as the dancing revved up. Catawba basketball player Jerrin Morrison headed toward the dance floor saying, “Hopefully I can break a sweat getting my dance on!” While most residents needed no prompting, a few others couldn’t resist when asked by the students. Such was the case when West student Emma Eremie asked Bart Bartholomew to dance. With the quote of the night, Bartholomew quickly replied, “I would love to dance. Just let me unhook my oxygen.”

Eremie is no stranger to Oak Park. She said, “I play in our band, and we come here quite a bit. I always look forward to coming here because the residents are so much fun and so sweet.”

Kelly Heinemann, Catawba College assistant director of housing and supplemental instruction, brought the Catawba College students. She said, “Catawba has done some things with Oak Park in the past, and we want to establish a partnership here. It’s good for us for be a part of such a fine event. We helped with the decorations and our kids are getting a lot of joy from being here tonight.” Heinemann also coordinated the prom king and queen contest.

Oak Park residents were appreciative of the efforts of all the volunteers and staff. Diana Ellenburg said, “It is just another wonderful thing that they do for us. Thanks to everybody for all the time and effort.”

“One of the basketball players danced with me while I was in my wheel chair,” Martina Stonehouse added, “It is so nice to revive wonderful memories of our youth.”

The climax of the evening was the crowning of the King and Queen of the Hollywood Prom. A loud cheer accompanied the announcement that Bart Bartholomew had been voted king and his wife, Betty, queen. Betty said, “I thought Bart would win. He is very popular. I didn’t even want to run, and I am very surprised and thankful to win.”

Bart Bartholomew let it be known that this was the first prom he ever attended. Betty said, “He went to high school in Nebraska, and his class only had 11 graduates. Bart loves to tell how a third of the girls in his graduating class were pregnant. He doesn’t always tell that there were only three girls in the class.”

“Bart loves to perform. George Burns couldn’t have done it better. When Bart was a youngster, his dad was the only doctor around. His mom would dress him up each morning and Bart would go out and perform for each of the neighbors. Then he would come back and report to his mother on the well-being of everyone. He still stops by every table each morning at breakfast, and sings a song. Those at the table have to finish it.”

Oak Park Retirement Activities Director Karen Leonard said, “Bart Colson, owner of our parent company, Hawthorn Retirement, shared the concept, and now every Hawthorn community is having a prom. By involving the community, the idea was extended to show our ‘senior’ residents how much our local high school and college students cared about them. It is a way of giving back to our residents and a chance to spread some happiness while making some new memories. The Oak Park Prom was a community sharing their hearts.”

Leonard closed with, “We plan to keep building our relationships with the students. It looks to me like they now have over 100 new grandparents.”

Wayne Hinshaw: Hotel with a view

On a trip to Atlanta, I had the fortune of staying in a room on the 20th floor of a... read more