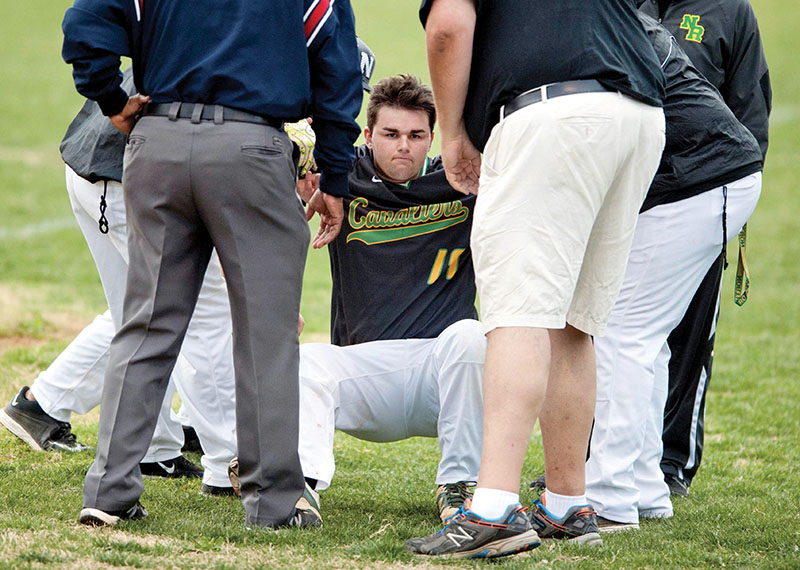 JON C. LAKEY / SALISBURY POST North Rowan’s Brandon White (17) is helped off the field April 7 after injuring his knee in the top of the first inning at Salisbury. Recently, the state Board of Education directed school districts to have certified athletic trainers or first responders at every high school game and practice. The state now only requires trainers or first responders to be at every football game and football practice.

The system of care for high school athletics is in the beginning stages of what is aimed at being a major overhaul.

A month ago, the state Board of Education directed local school districts to have certified athletic trainers or first responders at every game and every practice for every sport.

These people may not be a coach of an in-season sport. For instance, an assistant football coach cannot cover football practice or any other sport in the fall sports season.

There is no timetable for districts to implement this new policy. Rowan-Salisbury Schools and Novant Health Rowan are about to start figuring out how to meet the new standard. Dr. L. Stewart Hobbs, the athletic director for Rowan-Salisbury Schools, and Gary Blabon, the director of operations for Novant Health Rowan Medical Center, have yet to get together on this although a meeting is coming soon.

“We need to get a grasp of where we are with athletic trainers and how much is being utilized,” Hobbs said. “…I don’t think anybody in this organization wouldn’t love to have full-time certified athletic trainers at all facilities. How we get to that point? That’s the issue that’s problematic.”

It will take time. Blabon said he’d like to see it happen in the next five years.

“I think it needs to be handled in stages,” Blabon said. “I don’t think you can go from covering one sport to having somebody cover every sport, being there before practice and after practice. …Athletic trainers do so much more than cover the actual event.”

It will also take more trainers.

“I don’t know if people realize how big or how difficult it might be because that requires us to have multiple athletic trainers at every school,” said Sarah-Jayne Davis, the ATC/LAT covering athletics at Carson. “I think it will take two people to provide the coverage they are wanting.”

Hobbs said the district needs to hire full-time athletic trainers or first responders in order to have all the events at all the high schools covered.

There is a difference between athletic trainers and first responders. First responders are trained in first aid as well as emergency medical techniques such as CPR.

Certified athletic trainers go through a four-year program and graduate with a college degree. They must pass a national exam to gain certification and then they take another exam to receive their license from the state.

Trainers for high schools in the Rowan-Salisbury district come from Novant Health Rowan Medical Center through Pinnacle Orthopedic Clinic. Davis — who is also a clinical assistant at Pinnacle — works mornings at the clinic before driving to Carson to work practices and games for the Cougars.

She arrives in China Grove around 2 p.m. From there, she starts to prepare coolers for games or practices and sets up for the day. Athletes visit her in the training room to get prepped for games or to seek treatment for injuries.

In fall, she goes to football practices before going to cover a soccer game, if Carson is hosting one that day, after practice ends. In winter, Davis concentrates on basketball and wrestling. Trainers must be present at all home wrestling matches, she said.

In spring, Davis spends most of her time on game nights at girls soccer while also floating between baseball and softball games. The South Piedmont Conference plays all baseball, softball and girls soccer on the same night at the same site.

Davis said girls soccer garners the attention in spring because of the increased risk for head injuries over the other sports.

It’s impossible to ignore the role head injuries and their long-term effects play in this undertaking.

“You look at the NFL, and they have a big concussion lawsuit,” Hobbs said. “And you hear parents don’t want their children to participate in football and athletics because of some head injuries. I think it’s time to take a serious look at [why] we need athletic trainers at everything.”

Athletes today are bigger, faster and stronger than they were in the past. They are in the weight room year-round. They work on skill development in the offseason. All of that leads to games that are more physical and can inflict more damage on the body.

“When I was in high school, if you were lifting weights, that was just something you did,” Hobbs said.  “Now, it’s part of your training, and it’s year-round. Times have changed, and we have to change our way of thinking to protect the student-athlete.”