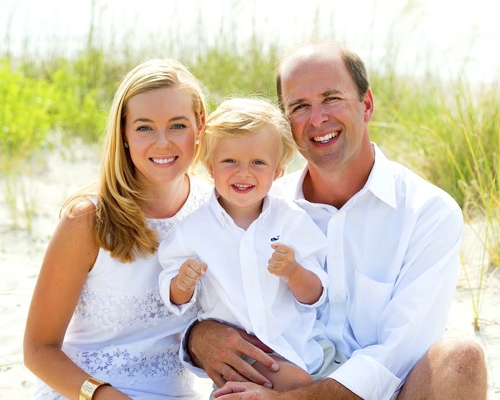 Kristy Woodson Harvey, author of "Dear Carolina," with husband Will and their son, Will Jr.

Kristy Woodson Harvey bubbles with enthusiasm when she talks about her new book and her happy life. The daughter of Salisbury’s mayor, Paul Woodson, and Beth Woodson, is from Salisbury and has a journalism degree from the University of North Carolina at Chapel Hill. She also has a 3½ -year-old son and a husband who is a dentist in Kinston.

And she has her first novel, “Dear Carolina,” published by mainstream publisher Berkley, as a trade paperback. No wonder she’s so excited.

Kristy was an intern at the Salisbury Post in 1999, and fell in love with writing and journalism. Her plan was to go to law school, but never made it.

“Dear Carolina” is the story of two women, Frances, nicknamed Khaki, an interior designer with a great husband and nice house, and Jodi, a 19-year-old recovering alcoholic who finds herself pregnant.

Khaki desperately wants a second child. Jodi is terrified of what might happen to hers, with an absent drunk for a father and a history of poverty and alcoholism from her mother’s side.

Kristy has an interior design blog with her mother. Khaki has a young son. Kristy said the rest came to her through the characters. Jodi was the first one to speak to her, mimicking a moment Kristy had after the birth of her son. “I wrote the book right after, like days after my son was born. I think it was a very real time for me to write a book. … I was experiencing some of the things Jodi goes through.”

Kristy looked at her baby and thought, “I’m so totally in love with him that I could not imagine breaking that bond.”

‘A lot of hormones’

The book was an exploration of that. “What would happen in your life to make that difficult decision. It’s the hardest thing you’d ever have to do, and it’s really very selfless.”

Kristy laughs, “There were a lot of hormones in that book.” She had the idea, but she couldn’t face writing it, at first, couldn’t write the emotions of the character who gives up her child. “I had to write some of that later.”

Kristy signed with an agent when son Will was just a few months old. She had written a manuscript while she was pregnant. “People said ‘You’re so crazy’ but I needed to do something.”

Jodi is no one she knows. “I don’t know where she came from, out of my imagination. … I remember having this moment, holding him, wondering what would have to happen. It was a really weird thing, I can only compare it to when they say your life flashes before you. In an instant, I knew what the whole book was about, the characters and what was going to happen.”

Jodi’s voice came to her, but she didn’t write the first draft with that voice. “I had written the book and her voice was way more mainstream than that. I thought, I’m sending this to New York, and they can’t relate to that.”

Then the book won a writing contest,  and her agent thought the two voices sounded too much alike. She asked Kristy to rewrite and “I said, ‘Yes, this is how I wanted her to sound.’ The story became more real. It was sort of what it was meant to be; she became so real.” She rewrote it in a weekend, using Jodi’s true voice.

Jodi, at 19, is quite wise for her age, and wise in things Kristy knows nothing about, like farming and canning. Kristy says she thinks there have been people in her life who have had to struggle. Jodi “has such vulnerability, but strength and wisdom. … She’s young, but she’s been through so much. She’s not jaded. She still hopes her life can turn around. When you’re young, you can still be that resilient. I think her resilience is the best thing about her.”

Kristy wrote the book in seven or eight months, when her son was small. “When I work on something, I write 2,000-5,000 words a day, then I edit, edit, edit.” When “Dear Carolina” won the contest, things moved faster. Still, it’s a long road from manuscript to printed book. From the time Berkley decided to publish it  was a year to get the book in print. The contest took time, then the rewrite, then a rereading, then the president of the publishing company had to read it, then a board had to vote on it. All that happened last May. “I had to learn to be really patient.”

Her next book is scheduled for release a year from now, April 2016. It’s about family secrets and the decisions people make to protect those they love. Kristy is halfway done with a third manuscript.

She’s organized her own publicity tour, at her own pace, but she doesn’t have many hours to write while she’s promoting “Dear Carolina.” She’s amazed at how many doors have opened for her since her book was accepted. She started out at the grassroots level, but bloggers and reviewers have brought attention from a wider, national audience.

“That’s been the best thing for me to see that people really relate to this book. … It’s such good feedback for when the book is ready to go out into the world.”

The social media and blogging world have been invaluable, Kristy says. There’s so much immediacy that way.

Berkley is calling the book Southern women’s fiction. That’s OK with Kristy. When she first started writing, she thought she’d be more a Chic Lit writer, but this feels right. “It’s a little more serious than that. The thing is, when you’re in your 20s, that’s what you write. This one felt different. … They can call it whatever they want as long as they publish the book.”

Kristy did a lot of research and says she learned a lot of things. Friends have asked her for a cookbook to go along with the novel — Jodi is always talking about canning and cooking. Kristy hopes to have a little something she can give away to some people who buy the book.

She took a roundabout route to find her dream. She was going to go to law school, then she thought she might go to New York and write for magazines. Then she met Will, her husband, who graduated a year before she did. They moved to New Bern, where he had a dental practice. So, while she was there, she needed something to do, and she got a master’s degree in multicultural and transnational literature, then planned to teach. But the economy tanked, and she could not find a fulltime job. Her brother-in-law ran a Northwestern Mutual office and invited Kristy to try it. “I hated math,” but she took training and did well, and enjoyed that job. Then they moved to Kinston, to set up a new dental practice, and she helped set up the office. Then, it was back to writing her interior design blog with her mother and raising little Will.

Kinston is a hip, up and coming town, Kristy says. There are exciting restaurants like Vivian Howard’s Chef and the Farmer, and galleries are popping up. It’s becoming a day trip destination. Kristy will sign books at their big barbecue festival on the Neuse River, which sounded hysterical to her publisher, but she’ll be in the same tent with Howard, who is a friend, and Kristy knows the chef will draw big crowds.

No. “I’ve worked very hard. It sounds like everything fell into place. I did everything I could think of. I was everywhere, I did everything. There was a lot of blood, sweat and tears. Now it sounds easy, but there’s an element of luck and magic involved.

Kristy Woodson Harvey will have an event at Salisbury Academy on May 7 at 7 p.m., open to the public. then she’ll be at Literary Bookpost for a Mother’s Day sip and sign on May 9, from noon to 3 p.m.

Bag it at book sale Monday