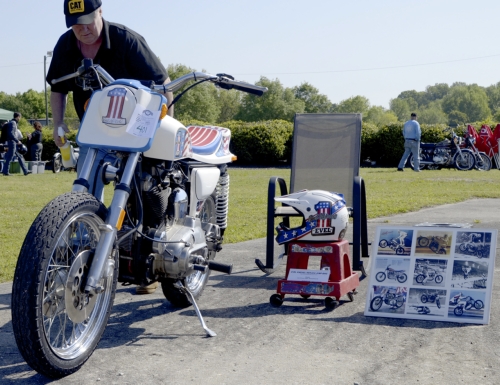 Hugh Fisher/For the Salisbury Post Lyle Hogan polishes the replica of Evel Knievel's high-jumping motorcycle, built by his friend Danny Whitfield of Greensboro. The Knievel bike was one of some 80 motorcycles on display at the N.C. Transportation Museum for the annual Carolina Classic Motorcycle Show, held Saturday.

SPENCER — From the classic cruisers ridden by gangsters in 1950s biker films to the roaring sport bikes of the 1980s, it seems most every motorcycle fan has a favorite vintage style.

Motorcycles of many makes and generations took the field Saturday for the ninth annual Carolina Classic Motorcycle Show at the N.C. Transportation Museum.

Event organizer Les Josey, of the Triad Classic Motorcycle Club, said the purpose of the annual meet-up is to celebrate vintage and classic cycles. About 80 motorcycles were expected to appear over the course of the morning and afternoon.

“We’ve had great weather predicted, which always helps,” Josey said as the morning’s first attendees roared out onto the field and found their marks.

Guests took ballots and voted for their favorites in the people’s choice judging, with eight categories based on nationality or engine size.

“Since it’s people’s choice, (the awards) really are just based on interest,” Josey said.

Trophies made of recycled motorcycle gears and parts sat nearby, waiting to be presented later in the afternoon.

For many years, Josey said, motorcycles were stigmatized in the U.S. and some other parts of the world.

“There were movies such as ‘The Wild One,” with Marlon Brando, which was banned in many areas,” Josey said. “It’s pretty tame today. Basically, it was portraying motorcyclists as beer-drinking hoodlums.”

Today, Josey said, most people realize that motorcyclists are generally good people. “I mean, they still drink beer,” he joked.

Out on the field, flags of different nations marked the major geographic regions represented – Europe, the U.S., England, Japan.

One of the first to arrive was one of the motorcycles that several attendees said changed the entire landscape: Honda’s 750 Four, which helped Japanese manufacturers become dominant in the market.

“I look forward to this show every year,” said Kelly Britt, of Indian Trail, who owns a restored 1978 750 Four, which he described as “the original muscle bike.”

“The inline fours changed the motorcycle world, period,” Britt said. “This was your first super bike.”

A little while later, Bill Hickok and Elizabeth Inghram, of Concord, set up across from Britt’s Honda with Hickok’s 1977 Triumph T140 Bonneville.

“That’s the bike that put (Triumph) out of business,” Hickok said, pointing over Britt’s motorcycle. “You can ride it forever, it didn’t fall apart.”

Even so, Hickock’s Triumph – complete with a custom installed Texas brand sidecar – was a powerful bike in its own right.

For the first time at this year’s event, a swap meet element was added, allowing motorcycle owners to sell both cycles and parts during the show.

From unique to unusual, both antique motorcycles and some interesting entries – including a Filipino motorcycle taxi – were on display.

Perhaps the most obviously American entry was the red, white and blue replica of one of daredevil jumper Evel Knievel’s famous stunt bikes.

The replica Knievel bike – a customized 1980 Harley-Davidson iron head Sportster – was built by Danny Whitfield, of Greensboro, and is owned by Lyle and Conor Hogan of Summerfield.

“Evel Knievel was my boyhood hero,” Lyle Hogan said. “I can remember when I was about 12, and my mother would pin a towel around my neck. That was my cape, you see.”

Hogan said he’d build small ramps in the road and make jumps. He’s got the scars on his arm to prove it.

Hogan said he and Whitfield built the replica Knievel bike in honor of the late stunt rider. “The old heads like me will recognize the bike right off … The youngsters may not have even heard of Evel Knievel.”

Young and experienced motorcycle fans were on hand, including quite a number of families who stopped at the field on their way to or from other exhibits at the N.C. Transportation Museum.

Dean McQueen, of Fayetteville, brought his daughter Deanna, 11, to the show, where he had his 1966 Honda Super 90 on display.

“The best thing about it is the people, the camaraderie,” McQueen said. “Like I say, most of the people you meet at any event like this are great.”

Deanna is too young to ride on the streets, of course, but she does ride along with her father from time to time, he said. “She’s got a 1972 750 that I’ve restored for her. She can take it off to college with her, if she wants,” McQueen said.

“I think the best thing about it is the diversity,” Mitch Gaither said. “Most people’s motorcycles, they restore to their liking. Some people throw a personal touch on it, and it’s a reflection of their personality.”

Although the styles have changed and the technology is newer, Gaither said, the fans of motorcycles form a family that’s open and welcoming.

“The cool thing is, no matter who you come to out here … you’ll be able to talk to anybody,” Gaither said.

By Shavonne Walker shavonne.walker@salisburypost.com KANNAPOLIS — No charges had been filed as of Friday against a Kannapolis firefighter accused of... read more