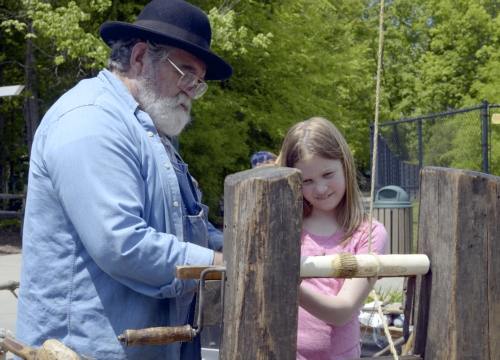 Walking through the courtyard near the carousel at Dan Nicholas Park on Saturday could have made you feel like you were traveling back in time.

Alongside the modern displays were some old-timey touches: a coal-fired forge and the ring of a hammer on an anvil, the smell of wood shavings and a stack of white, freshly-turned spindles that could go on to become parts of handmade furniture.

These were some of the scenes at Saturday’s annual Simple Living Festival, an opportunity for locals to see handmade crafts and hard-to-find wisdom on display.

The purpose of the event is to celebrate the ways of life that were common over a century ago, before modern technology and modern conveniences.

Unlike some historical demonstrations, the Simple Living Festival had a hands-on element.

Steve Martin, a woodworker, demonstrated his foot-powered lathe – a perennial favorite at the annual festival.

“What’s interesting to me is how few old-timers know about this,” Martin said of the traditional lathe, used for everything from making chair legs to spindles.

Martin said that farmers and carpenters of centuries ago knew how to make and use the lathes, which use a flexible green sapling trunk, rope and a wooden frame to create the early “power tool.”

Tina Shelton, a furniture designer, spent time at Martin’s booth and watched a short demonstration. Martin let a young volunteer, Carissa Ireland, come up to have a turn learning how to work the lathe and carve a short stretch of bark off a piece of wood.

Getting to use the lathe “made me feel old and wise,” said Ireland, 8, who was at the park with her mother, Genevieve. They made the trip from Lexington for a party and stopped to see the demonstrations.

“We’ve never seen anything like this,” “Genevieve Ireland said. “Now she’s got something to tell her friends at school.”

“This is impressive. This lets me be even more proud of what I do,” Shelton said. “Old fashioned technology, if you once learn how to do those trades, they’ll last you forever.”

Around the corner, James “Jeep” Sabo, owner of Jeep’s Forge, had his wares on display and his portable coal forge set up.

Working at the fire was Tom Caudle, who lives near Monroe. Caudle, one of Sabo’s students, explained the basics to onlookers, including a Girl Scout troop visiting from York, S.C.

Caudle said he heard about Sabo’s blacksmithing training on the Internet. “It’s something I’ve wanted to do for a long time, and I decided basically, at my age I ought to get started,” Caudle said.

As he talked, he cranked a handle to blow air into the forge, heating the coal fire to over 2,000 degrees.

The most interesting thing he’s learned so far about blacksmithing, Caudle said, was the wide variety of things that one can make with a hammer, an anvil and hot metal.

As he talked, Caudle pulled a metal rod out of the forge, where the end was glowing a bright orange.  Carrying it to the anvil, he continued the process of shaping the metal into a hook – one of the simple items a beginning blacksmith forges to master the basic techniques.

“The neat thing is, you make a mistake, you just heat it up and redo it,” Sabo said.

In the days before rapid transportation, Sabo said, it was impossible to just go to a store to repair or replace a tool.

Bobbi Rae Moose’s booth at the Simple Living Festival was probably the sweetest-smelling, as she demonstrated how to make a fresh batch of clove-scented Castile soap.

Using grated soap flakes that look very much like mozzarella cheese, Moose stirred soap in a pot as onlookers stopped to watch, and to peruse the bars and jars she had for sale.

There are a few differences between the soap Moose makes and the way it would have been made years ago, she said.

For one thing, she uses modern essential oils, such as patchouli, in addition to classic scents like lavender.

“I use olive oil instead of animal fat … and I buy my lye, where people years ago would have made their own lye out of wood ashes,” Moose said.

Otherwise, the soaps she creates are very similar to those families made and used for centuries.

Matt Hatley, a wood carver, said there’s an old saying that every tree has a face hidden within it.

“The good Lord puts it there. All I do is bring it out,” Hatley said.

While Martin uses old-fashioned technology to turn wood, Hatley uses modern-day tools to create crafts and gifts that would have been common over a century ago.

“Back then, you made your gifts,” Hatley said. He held up one such decoration, a stick of pine carved into the face of an old man.

The wizened faces have had several names through the centuries, depending on where you go, Hatley said. “Now, they’re called wood spirits. With Harry Potter and all that out there, you know, that’s where this face come from.”

Eagles, gnomes and other mythic creatures were among the creations in Hatley’s tent, as well as Christian art and other decorative items.

“I started out as a boy, carving little wooden birds,” Hatley said. “It goes back to the old people, coming up. You try to make something useful if you can, but we’re blessed by raw material in this area.”

And so, creativity turns pine knots into an old man’s face. “That’s how it’d start, and then they’d make up all kinds of stories with it.”

Today, he keeps doing it as a hobby and because he likes people. “What I like to do is show children that there’s so much you can do with a piece of wood,” Hatley said. “Each and every tree has its own characteristic, its own useful purpose.”

For those who watched him work at the Simple Living Festival, Hatley said, he hoped they would take away the fun of creativity. “I try my best to pass on what I can,” he said.