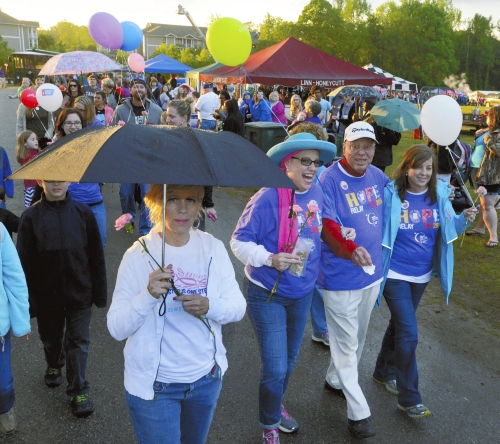 Cindi Hanrahan, Deborah Howell, Bob Kimball , and Karen Hardy walked as a family in the Relay for Life 2015. All of the girls are sisters and all are brest cancer survivors. Bob is their father. photo by Wayne Hinshaw, for the Salisbury Post

“Uplifting and humbling”: Relay for Life gets underway at fairgrounds

Cancer may indeed fear the walker, but organizers of the 21st annual Relay for Life wouldn’t let the survivors’ lap begin until the rain stopped.

So after a 50-minute rain delay Friday night, the evening got started in earnest.

The delay didn’t much bother the survivors, who chatted amiably under a huge white tent at the Rowan County Fairgrounds, waiting for their place in the sun, so to speak – even though it was nowhere to be seen.

“The building behind you is a safe place,” she said, gesturing to the events hall. “If we tell you to run, run that way.”

There was no running. It was just a passing rain shower — no thunder or lightning or violent wind—nothing like the horrible storm that took down the 2003 Relay. (Margaret Basinger, boss queen of the award-winning Sweet Potato Queens team, said the storm took place that year. If that’s not right, blame her.)

In his prayer, the Rev. Mark Burns of Mount Zion United Church of Christ in China Grove said that Relay offered a glimpse of “a new heaven, and a new earth,” and he was right.

The setting sun broke through the clouds just as the Jesse Carson High School drum line cleared the track for survivors. The drum line sported purple T-shirts — the color of the survivors’ shirts — with white text, “More cowbell, less cancer.”

Among the survivors were Stacey Shafer, a two-year breast cancer survivor, walking with her three children, Grace, Grant and Gabriel; her co-worker Laura Blackwell, a 6½-year breast cancer survivor; Celeste Ward and Ann Teague of the Sweet Potato Queens; Rhonda Elliott (“32 years, baby!”), who had Hodgkins in high school; and Preston Tadlock, 16, who was diagnosed with Hodgkins two months ago.

He received wonderful news this week; no further treatment at this time. As of last night, his family had sold 500 Team Preston T-shirts.

There was Mary Willis Page, a 2½-year survivor of ovarian and uterine cancer.

It was a poignant day for Mary Willis, because it was also the fourth anniversary of the death of her mother, also a cancer survivor.

“I brought all my tissues,” she said, reaching into her jeans pocket.

Experiencing the survivors’ lap, she said, is hard to put into words. “It’s amazing to be with other people who have heard the same words you’ve heard.”

Preston had a hard time describing the survivors’ lap, too.

“It was uplifting and humbling,” he said. “It just makes you feel so supported.”

Pharmacist Andy Caudill has been a survivor for 7 years, 8 months, if you want to get technical, he said. He was at Relay, as always, with wife Sabrina and their children, McKenna and McGuire.

“I love it,” he said of the survivors’ lap. “It’s emotional. It’s good. But I miss walking with Glenn (Tyson), Sabrina’s dad.”

Andy noted that patients at his pharmacies, Price Pharmacy in China Grove and Granite Quarry, would be making the lap with him.

Diagnosed Jan. 23 with breast cancer, Deborah Howell walked the lap with her sisters, Cindi Hanrahan and Karen Hardy, both breast-cancer survivors, and their dad, Bob Kimball, himself a survivor.

Deborah, who’s run two half-marathons and a full marathon, was thrilled to run 1½ miles last week. She’s got the second of four chemo treatments on Wednesday, and will complete treatment June 17. She’s been wearing lots of big hats and scarves, she said, and last night paired a turquoise hat with a hot pink scarf.

Deborah has now lost most of her hair, but a huge group of enthusiastic cosmetology students from Rowan-Cabarrus Community College was on hand to cut hair for the Pantene Great Lengths program. They sported black T-shirts with “Cut It Out — Join the Fight Against Cancer” printed in hot pink.

The glow of the brief sunset was soon replaced by the glow of luminaria, carefully set up all along the track for the luminaria ceremony, which took place shortly after 9 p.m., under a full moon.

In January 2010, Patrol Deputy Brian Benfield was on his way to a domestic call behind two other Rowan County... read more