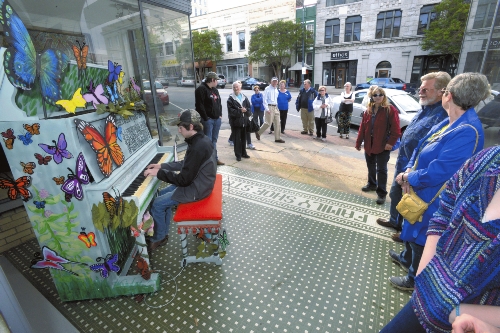 Joseph Stewart, a junior at West Rowan High plays the West decorated piano in the "Metamorphosis" theme in the "Tickle Our Ivories" project. photo by Wayne Hinshaw, for the Salisbury Post

Music literally echoed off the buildings around downtown Salisbury on Friday, thanks to an art project said to be the first of its kind in North Carolina.

As he switched from a fast-paced ragtime song to the opening notes of “Amazing Grace,” he turned to the six people watching him play in the entryway.

“You ain’t gonna sing?” Stewart asked, grinning. “You said you were gonna sing a little bit ago.”

That was all the invitation Henderson Independent High School Principal Lennetta Bartley and other onlookers needed. They gathered around Stewart and sang along in full voice.

Hymns, soulful songs, classical music, show tunes – all of these, and more, were played by amateurs, trained pianists and passers-by.

And that’s exactly what the Come Tickle Our Ivories project is designed to do, organizers said: encourage people to mingle and enjoy making music in downtown spaces.

Seven donated pianos have been transformed by local art students into visual and auditory works of art.

The official unveiling of the pianos took place during First Friday, the start of a five-month period when they’ll be on display downtown.

It’s the latest evolution of a public art trend originated by British artist Luke Jerram. Since 2008, Jerram’s public art project, “Play Me, I’m Yours,” has seen over 1,300 pianos installed in 45 cities worldwide, according to the project’s website.

When she heard about it, James said, the idea seemed perfect for Salisbury.

“Last August, I contacted the art teachers. They were all on board,” James said.

It was easy to find seven pianos and get them into shape. It took a little longer to find seven public spaces where the pianos could be kept accessible, but out of the weather, James said.

“It’s drawn a lot of people out of the woodwork who don’t have access to a piano,” James said. “This gives them a chance to just sit down and try their hand at it.”

The project is also a fundraiser for both the Salisbury Symphony and the local schools. James said the proceeds will be divided between the orchestra and school art programs.

“Whenever there are cuts, you know, it’s art that goes out the window,” James said.

A junior at Salisbury High School, Woods said he first heard about the art project at a Junior Rotarian event. He said this event, and others like it, can help build bridges in the community.

“I do feel like high school students have been drifting apart, emotionally,” Woods said. “They’re not understanding each other.”

Woods said art projects like this one, focused on bringing students throughout the county together, are good ways to overcome that.

“What it really does symbolize for me is how talented this county is, not just academically and in sports,” Woods said.

As kids looked on and smiled, Hill launched into an impromptu rendition of “If I Only Had a Brain,” from the movie “The Wizard of Oz.”

A longtime fan of music, Hill said he recently started taking piano lessons at Griffin’s Guitars.  “I really wanted to play music on a piano – I play a lot of guitar, but piano is so much more open. All the notes are laid out in front of you, in black and white, obviously,” Hill said.

Just the experience of putting music theory into practice was enough to make Hill love playing piano, which he said “helped me expand my musical vocabulary and my musical mind.”

“I think sometimes we overlook the importance of the arts, and music,” James said.

The skills that arts and music develop are relatable to other fields, such as science and math, James said.

More than that, James said, art and music can bring people together.

“People are aware that we’ve had some friction between city and county,” James said. The project, she said, can serve as “a unifying event,” to help bring families together no matter where they’re from.

The pianos will remain on display through the end of September, so that the public can continue to discover new talents or get reacquainted with talents they might have forgotten.

More information on the fundraising project is available at Salisburysymphony.org.