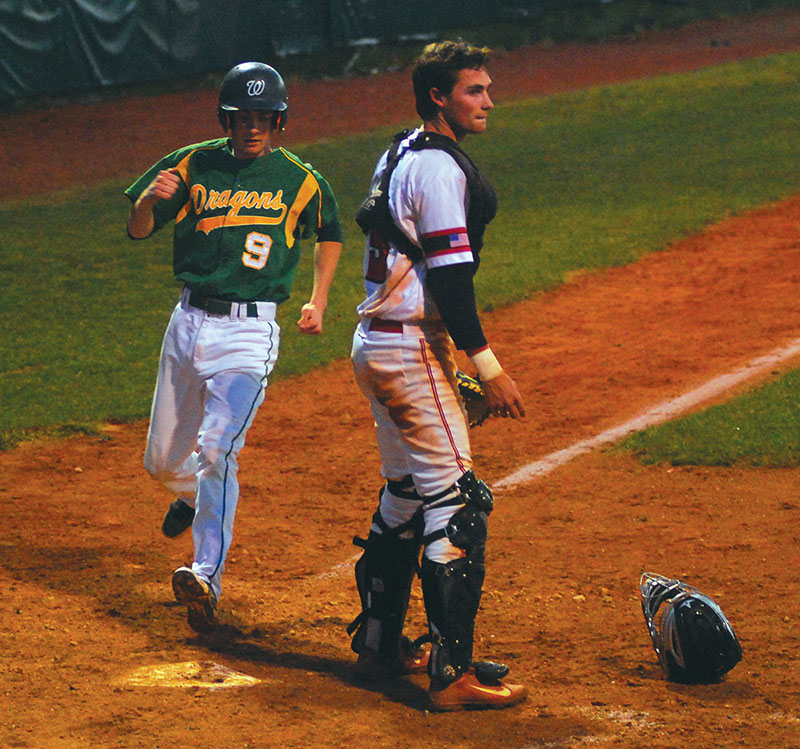 SALISBURY — It looks like Monday will be a work day for Salisbury’s baseball team.

The Hornets lost their shot at a first-round bye in next week’s Central Carolina Conference tournament — and an automatic bid to the 2A state tournament – when they dropped a 4-0 decision to league champion West Davidson on Friday.

“It means we’re the fourth seed,” shortstop Riley Myers said after Salisbury (16-7, 6-4) had its seven-game winning streak snapped. “And we might see them again.”

If they do, it will be in Tuesday’s semifinal round at Finch Field in High Point — and that’s got West Davidson coach Jerry Walser twitching like a frog in a science experiment.

“Salisbury is playing as good as anyone in the league right now,” he said after securing his 250th career victory. “They’ll be a very dangerous team from this point forward.”

Salisbury was best at squandering opportunities against the Green Dragons (17-2, 9-1). It managed six hits against West Davidson starter Tyler Willard and winner Justin Freeman, including leadoff doubles in the sixth and seventh innings. But the Hornets stranded nine baserunners, six of them in scoring position.

“Their pitching was solid,” said Salisbury catcher Will Steinman (3-for-3 with two stolen bases). “But so was ours. We just didn’t get the timely hits.”

A telling example came in the bottom of the fourth when Salisbury loaded the bases with none out and chased Willard, an unbeaten right-hander, off the mound. Freeman entered nursing a 2-0 lead and immediately induced freshman Chandler Lippard to bounce into a 1-2-3 double play.

“Getting out of that inning with one run scored would have been nice,” said Freeman, a lefty who improved to 7-0. “But no runs? That was even nicer.”

Freeman used his buzzing fastball and tantalizing curve to escape another jam in the fifth. Steinman beat out an infield hit and Ryan Jones walked, putting two Hornets aboard with none out.  When Freeman fell behind 3-and-0 to Myers, opportunity was knocking again.

“I was leaving a lot of pitches up in the zone,” he said. “With Riley, I knew I had to bear down and challenge him because he’s such a great hitter.”

Freeman battled all the way back and struck out Myers on a 3-2 fastball for the first out. Then he caught Salisbury cleanup hitter J.T. Austin looking at a 2-2 curve and fanned Alex Yang to extinguish the threat.

Salisbury made one last charge up the hill in the last of the seventh, only to be stifled again. This time Steinman crunched a leadoff double to center field and advanced to third on a groundout. With Myers at the plate Freeman uncorked an apparent wild pitch that ricocheted of catcher Casin Fowler’s shin guards and rolled straight back toward the mound. Steinman raced for the plate but was cut down when Freeman’s glove-handed flip to Fowler beat him.

“We work on glove-flips all the time,” the pitcher said. “We just had to make sure we executed that one.”

Steinman, a junior catcher, said he was trying to be aggressive.

“But I shouldn’t have tried it,” he said. “A game like this kind of humbles you.”