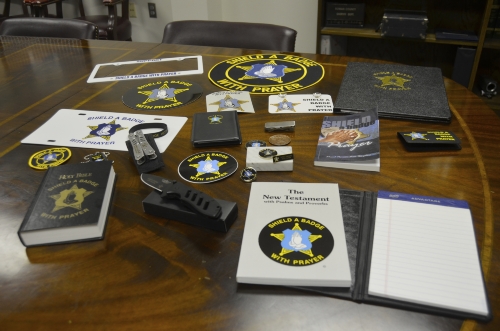 The Rowan County Sheriff's Office has an active Shield-A-Badge program, which involves volunteers in praying for deputies and their work. Shavonne Walker/Salisbury Post

In January 2010, Patrol Deputy Brian Benfield was on his way to a domestic call behind two other Rowan County Sheriff’s deputies when he hit a patch of black ice on Airport Road. In an instant, his patrol vehicle spun around and overturned, pinning the deputy inside.

He was wearing his seat belt, but was trapped and worse he’d hit a gas main. The line was blowing gas fumes into the car and Benfield was still stuck, upside down.

He was able to reach his radio and tried to call for help, but couldn’t hear any response over the hissing sound of the gas.

“I tried to get out of the car, but couldn’t get out. I tried every way I could,” he said.

He managed to open his door and give himself an 8-inch gap so he could breathe.

“At one moment I’m inside the car and then the next I’m outside. I can’t explain it,” Benfield said.

Benfield believes God delivered him from a dangerous situation that seemed hopeless. He also believes without the prayers of strangers he wouldn’t be here five years later.

A patrol deputy soon arrived and was able to get Benfield out of the car and take him to the hospital.

Benfield is just one of many law enforcement officers who receive prayers from strangers through the Shield-A-Badge with Prayer program.

Churches and individuals sign up for the program and get an officer’s name and pray for that officer for a year.

Some people keep the same officer for years or get someone knew, said the Rev. Michael Taylor, who presides over the program locally. Taylor is a chaplain with the Rowan County Sheriff’s Office and pastor at Phaniels Baptist Church in Rockwell.

The program is in its 20th year and allows those who sign up to send officers thank you notes, gift baskets, birthday or Christmas cards.

Each year Taylor raises funds so every officer receives a prayer Bible, wrist bands, dog tags and other materials. The Shield a Badge with Prayer program is a nonprofit and donations are tax deductible.

Last year Taylor gave out 850 to 900 notebook covers with the agency’s emblem etched on them.

His son, Michael Paul Taylor, said one day if his dad decides to retire, he’ll continue the program.

“I don’t ever want to see it end. It’s a powerful program,” Michael Paul Taylor said.

Taylor is asking people to renew their commitment and others who’ve never joined to make the commitment to pray for a an officer or responder.

“Prayers are very important for those of us who are doing this job. It’s because of people having their faith in God and praying for us. He hears those prayers and answers those prayers,” Benfield said.

Benfield said “it’s uplifting to know people are praying for you and appreciate you. It’s always a very uplifting thing.”

For more information about the Shield A Badge with Prayer program, contact Chaplain Michael Taylor at 704-782-7201 or submit name, address, phone number by mail to 2675 Phaniels Church Road, Rockwell, NC 28138.