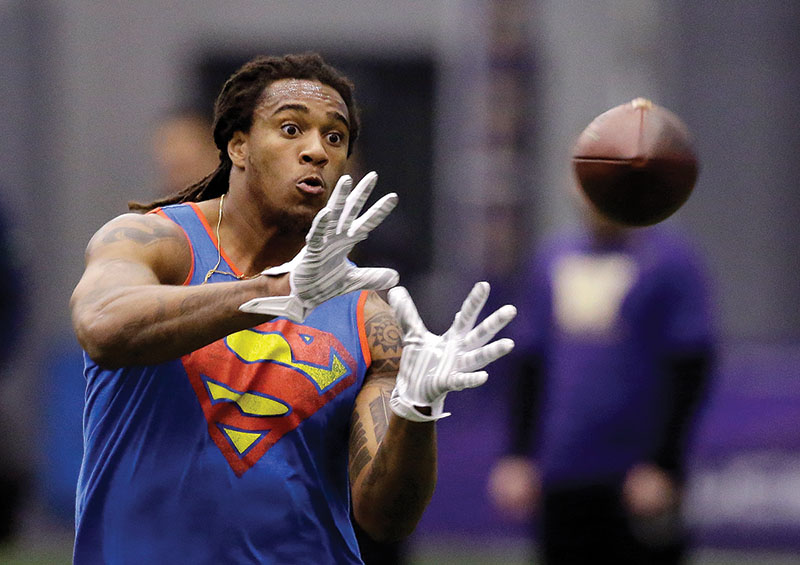 The Associated Press Former Washington player Shaq Thompson reaches for a pass as he works out at Washington's pro day April 2 in Seattle. Thompson was selected 25th overall by the Carolina Panthers on Thursday in the first round of the 2015 NFL Draft.

CHARLOTTE, N.C. (AP) — The Carolina Panthers have selected versatile linebacker Shaq Thompson from Washington with the No. 25 overall pick in the NFL draft.

The 6-foot, 228-pound Thompson was the winner of the Paul Hornung Award, given to the nation’s most versatile player.

He scored six touchdowns in 2014 — four on defense and two as a running back. He even started at tailback against Colorado last year and ran for 174 yards and a touchdown on 15 carries and caught two passes for 41 yards.

Thompson had 3.5 sacks, 15 tackles for loss and five fumble recoveries in 40 games at Washington.

Thompson was also drafted by the Boston Red Sox in the 18th round of the 2012 MLB Draft, but wound up playing football.

The Panthers have nine picks overall in the draft, including two compensatory selections in the fifth round.

Ironically, Thompson could wind up being the long-term replacement for the man who announced Carolina’s selection on Thursday night from Chicago — outside linebacker Thomas Davis, this year’s Walter Payton Man of the Year

The Panthers are hoping to follow their recent string of success in the first round.

Over the past four seasons, the Panthers have selected wide receiver Kelvin Benjamin, defensive tackle Star Lotulelei, linebacker Luke Kuechly and quarterback Cam Newton in round one. Davis was also a former first-round draft pick.

Thompson should only help a defense that finished 10th in the league last season.

The Panthers had been in the market for an offensive lineman, but six had gone off the board before their pick.