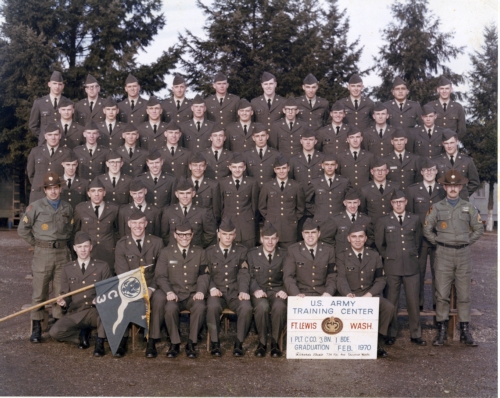 A letter from past brings Kent State shootings back to life

It was written and mailed to him May 5, 1970, the day after the shootings at Kent State University, when soldiers with the Ohio National Guard opened fire on students demonstrating against the Vietnam War.

When things were sorted out, four students lay dead and nine others wounded. The day deeply scarred the country and only amplified the protests to get out of the war in Southeast Asia.

The letter came from Aaron Eltito, with whom Williams had shared six months of basic and infantry training at Fort Lewis, Wash. Both men had returned to their homes in April of 1970 — Williams to Rowan County, Eltito to Alliance, Ohio.

“He was a very good friend and a very learned individual,” Williams says today. “He was brilliant.”

The men were both squad leaders in their platoon at Fort Lewis. On their returns home, Williams would continue his service commitment with the U.S. Army Reserve; Eltito, the Ohio National Guard.

Though he had received word his assignment would be with the same National Guard unit that was on the Kent State campus May 4,  Eltito had yet to report. “He was in between (assignments),” Williams said. “He was in limbo.”

Something told Williams he should save Eltito’s letter for his children and grandchildren to read in the future.

Maybe it could add perspective to history.

The letter was one sheet of paper, typewritten on both sides, and in the initial paragraphs Eltito updated Williams on his trip home, a change in jobs and his intent to go back to school in the fall — back to Kent State, in fact.

Eltito introduced his fairly long narrative on the Kent State shootings with this observation:

“Yesterday’s ‘Kent Massacre’ (it can rightfully be called that, since only one more person was killed in the famed ‘Boston Massacre’ of 1770) leaves a bad taste in my mouth no matter how I look at it.”

Eltito was hardly a raging liberal. The “rock-and-bottle-throwing student mobs” raised his blood pressure “by a score of notches,” he told Williams. He complained that it seemed nearly useless in those volatile times to talk about such vague concepts as tradition, religion and honor “to a group of agnostic, cynical, presumptuous and barbaric individuals such as the news-manufacturing class of our generation.”

But here’s where Eltito’s letter took a turn. He found the National Guard’s actions May 4, 1970, to be “morally inferior” to anything the 2,000 protesting students had done.

“In purely philosophical terminology, there is one word which fits the situation perfectly: cowardice,” Eltito wrote.

“The word applies, no matter what the true situation at Kent was yesterday. I was not there. I don’t know whether or not there really was a sniper, If there was, firepower was justified, in the form of well-placed-shots.”

Eltito underlined that hyphenated phrase and went on.

“The present story is the Guard had run out of tear gas, was retreating up a hill where the men in green were fired on by a sniper from a rooftop. On this provocation, they opened up on the crowd.

“Even if the sniper had been in the crowd, there was no justification for indiscriminately shooting into the group. Many facts must be considered in judging this situation, but the Guard’s action, in my opinion, can never be justified.

Eltito soon ended his letter with some questions on how Williams was doing and reminding him of a favorite saying from their platoon leader, Scott Walker, who liked to say, “Men, there’s a reason for this.”

He signed off with a Latin phrase meaning a friend unto death.

Williams remains upset with himself to this day that he failed to write Eltito a return letter, and he never heard from his friend again.

While he settled into civilian life with his new job at Farmers and Merchants Bank, Williams faced about five-a-half more years as part of the U.S. Army Reserve. On his weekend commitments, he reported to Reserve companies in Salisbury, then Concord.

During his more extended summer requirements, he served as a drill sergeant at Fort Jackson and Fort Polk, often training guys who were headed to Vietnam.

To this day, the why of May 4, 1970, at Kent State is still unexplained. Why did the National Guardsmen fire into the unarmed, protesting students?

“I remember it being just a terrible situation,” Williams said.

Williams, 68, still has a photograph of the Company C men who graduated with him at Fort Lewis’ U.S. Army Training Center. The front row included Eltito, Ricky Graham of China Grove and Williams, who never understood why he was shipped across the country for his basic training.

Williams remembers being impressed when Eltito, the son of Romanian immigrant parents, won the essay contest in his company. The men were asked to answer the question: “What’s it like to be an American?”

Again, Williams thinks back to how smart Eltito was. He spoke several languages and gave you the impression, Williams said, that he could do anything with the life ahead of him.

Williams spent 42 years with F&M but never forgot Eltito. He recently found the old letter saved among things in his “memory box,” but his efforts to track down some evidence of Eltito or what might have happened to him have been fruitless.

“I never could find him,” Williams said.

But reading the letter was like hearing from his friend again.

Volunteers still needed for May 16 Blues and Jazz Festival