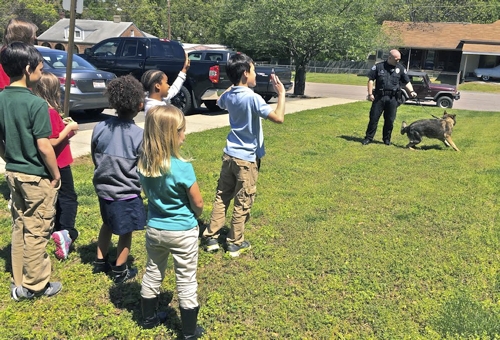 KANNAPOLIS — A very special member of the Kannapolis Police Department is a lot safer, thanks to the students at Woodrow Wilson Elementary School.

Boone, an energetic 2 1/2-year-old German Shepherd, is one of four K-9 officers in the Kannapolis Police Department, and he’s just weeks away from receiving his bullet- and stab-proof vest.

In an effort dubbed “Coins for K-9s,” Woodrow Wilson students raised to $974 to pay for Boone’s vest.

The protective vests usually cost $1,400, but through Vested Interest in K9s, a nonprofit with the mission to provide bullet and stab proof vests to law enforcement dogs across the country, they were able to get it for $950.

The vests are custom made for each K-9 officer, and Boone should get his vest in the next four to six weeks.

The vest should last five years, which will likely be the remainder of Boone’s tenure with the police department.

The vest is heavy, and can be a distraction to K-9 officers at first, he added.

All four of Kannapolis’ K-9 officers received vests this year, and another group is raising funds for a fifth K-9 that will soon join the force.

Sandy Summerlin, Woodrow Wilson Elementary’s STEM teacher, heard about the push to get vests for the city’s K-9 officers through social media, and thought it would be a good project for her students.

Summerlin placed a jar in each classroom, and encouraged her students to bring in whatever money they could earn or find.

They brought in their allowance, asked family members for loose change, and even collected money at church.

Ty Broadway, a fourth-grader, said he got his money by “searching through couch cushions.”

“I can attest to that,” Summerlin laughed. “I counted a lot of nickels and pennies.”

Boone’s sense of smell is 100 times better than a human’s, Corn told the students, adding that he can find people and narcotics just with his nose.

“There’s a lot of things they can do better than a human,” he said.

When police officers don’t know what they’re going into, they’ll send in one of their K-9 officers.

“This allows us to send him in with a vest,” Corn said.

The Woodrow Wilson students rallied behind Boone when they learned he needed a protective vest.

“He protects us, so we need to protect him,” Broadway said.

Summerlin said they want to make sure each dog in Rowan and Cabarrus counties has a protective vest.

Not only did Boone receive a valuable piece of equipment that could save his life, Coins for K-9s promoted a healthy relationship between Woodrow Wilson students and the Kannapolis Police Department.

Students were able to learn more about the police department, as well as their K-9 officers.

When the students hit the halfway point, Corn and Hinson joined the class who had raised the most money for an ice cream party.