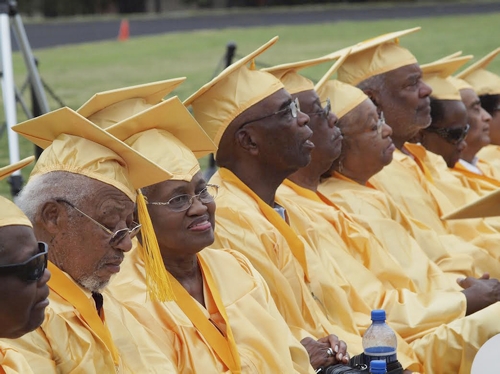 SALISBURY – When William C. Grant left his Mullins, S.C., home to attend college in Salisbury, it was a pretty big deal. After all, Grant’s two older brothers were just a few hours away at a college in their home state.

Grant didn’t really know what to expect out of Livingstone and enrolled largely on the advice of his high school principal.

“He lived in Salisbury right there on Institute Street and would be in South Carolina during the week and Salisbury on the weekends,” Grant said. “He was a strong advocate of Livingstone. What he said about it sounded good and he turned out to be quite a success, so I decided to give it a shot.”

Turns out Grant made a wise decision. He earned a bachelor’s degree in biology from Livingstone in 1965 and also met his future wife, Harriett Wilks, there.

On Saturday, she’ll travel with him to Salisbury when he returns as Dr. Grant to sit among a very elite class: the Golden Graduates.

Since the early ’90s, Livingstone has honored 50-year graduates by allowing them to dress in gold robes, sit together at commencement and walk across the stage to accept certificates after the graduating seniors receive their degrees. It’s a time-honored ceremony that makes Livingstone’s graduation extra special.

“I think it’s wonderful that the college honors us in that kind of way,” Grant said. “I’m not sure whether many institutions honor their golden graduates, but even if it isn’t unique to Livingstone it’s certainly a wonderful way to recognize us.”

Carmen Wilder, assistant vice-president for development and alumni relations, said the idea to honor Golden Graduates was the brainchild of Marjorie Kinard, a member of the class of 1964.

“She thought it was a great way to engage or re-engage our Golden Graduates in the life of the college,” Wilder said. “Among this year’s Golden Graduates class are doctors, lawyers, clergy, a bishop and a rear admiral, people who have made great contributions to society.”

Grant said he’s happy about seeing some classmates he hasn’t seen in a while, and others like John Daniels of Salisbury, with whom he keeps in close touch. Grant and Daniels became good friends at Livingstone and once roomed together in Harris Hall.

“I’m really excited about the chance to get caught up on what my classmates are doing now,” Grant said. “I just want to see them and interact with them and relive some of the memories from the past.”

Grant said he’s never regretted his decision to attend Livingstone, which he says adequately prepared him to obtain both a master’s and a Ph.D. in zoology from North Carolina State University. In his 41-year tenure at State, Grant has been assistant director of academic programs, and an associate provost. Currently, he’s a professor of biological sciences and director of the institution’s biological sciences program, which has 1,800 undergraduate majors.

“Livingstone prepared me well,” Grant said. “Being in the right kind of environment at the right time is very important. Here at State we see students who are better off in a close-knit, smaller environment. We have almost 35,000 students here, and everybody can’t start off at a university this big. I think being in a smaller environment for the undergraduate degree helps a person in terms of perspective, comfort level and confidence. I wouldn’t exchange what I received at Livingstone for anything because it gave me everything I needed to do well in subsequent study.”

Although Grant has three degrees under his belt, he said he’s really looking forward to walking across the stage Saturday in Alumni Memorial Stadium to shake hands with Livingstone President Dr. Jimmy R. Jenkins Sr. and receive his certificate.

He knows his wife will be on hand to witness his “second” graduation from Livingstone, but he isn’t sure whether their three sons, William II, Paul or Robert will attend.

Even so, he can’t wait to be back on his beloved campus as it’s been about three years since he visited Livingstone.

“I think Dr. Jenkins is doing a fine job in terms of the stability of the institution, the good name of the institution and the emphasis on quality in everything that goes on,” Grant said. “When my classmates and I get together, I’m sure we’ll talk about things that happened to us when we were at Livingstone, including things in class, at the Horseshoe and in Goler Hall. I’ve attended many events over the years and have been given numerous awards, but I must say that knowing I’ll be back at my alma mater in two days, amongst the people with whom I graduated 50 years ago, is really something special.”

In fact, you could say it’s golden.