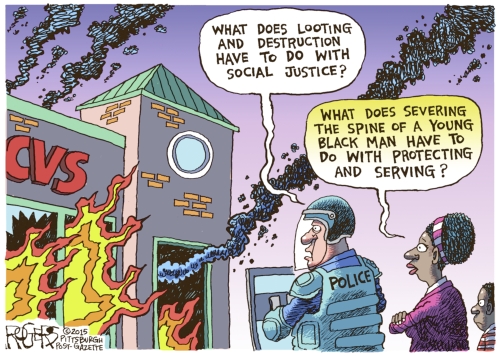 “There comes a time when people get tired.”

Tracy is tired. She was tired even before Baltimore burned this week.

I received an email from her on April 12. She wanted me to know she is a 55-year-old white lady from Austin, Texas, who is tired unto tears by incident after incident of police violence against unarmed African-American men ­ including a 2013 shooting in her own hometown. “What can be done?” she asked. “What can I do? I’m sincere in this question. I want to DO something. What can that be? I’m embarrassed to have to ask; I feel like I should KNOW what to do, but I don’t.”

There comes a time when people get tired. And then what?

In Baltimore, the answer some people gave was to break windows, smash cars, set fires and loot stores. In so doing, they gave aid and comfort to every enemy of justice who would just as soon not look too closely at what happened in that city. Meaning, of course, the death of Freddie Gray, a 25-year-old African-American man who mysteriously suffered fatal injuries  while in police custody.

As Martin Luther King noted after young people in Memphis broke windows and looted stores, violence has a way of changing the subject.

Similarly, we are now required to take time out from demanding justice for Freddie Gray to discuss the sacking and looting of Baltimore and to say the obvious: The road to better policing does not go through a burned-out CVS pharmacy. So the rioting — whether motivated by genuine anger or craven opportunism — was not just thuggish, short-sighted and self-defeating. It was also tactically stupid, ceding the moral high ground and giving media, politicians and pundits permission to ignore the very real issues here.

Not that they ever need much of an excuse, particularly over at Fox “News” and other citadels of conservative denialism. Indeed, on Monday night even as Baltimore burned, Fox’s Lou Dobbs was, predictably enough, blaming the violence on President Obama.

It has reached a point where you can’t keep the atrocities straight without a scorecard. Besides Gray, we’ve got Eric Harris, an unarmed black man shot in Tulsa who cried that he was losing his breath, to which a cop responded “F—- your breath.” We’ve got Levar Jones, a black man shot by a state trooper in South Carolina while complying with the trooper’s commands. We’ve got Oscar Grant, Sean Bell, Eric Garner. We’ve got video of a black man named Walter Scott, wanted for a traffic violation and back child support, running from a police officer and being shot to death. We’ve got video of a white man named Michael Wilcox, wanted for murder, running toward an officer, threatening him, daring him to shoot, refusing to remove his hands from his pockets, yet somehow not being shot.

We’ve got all this plus statistical proof. Yet the same people who cry “War on Christmas!” every time some city hall in Podunk erects a menorah can discern no racial disparity in police violence against unarmed men.

So if there comes a time when people get tired, who can blame them?

Reading Tracy’s email I was reminded of how a white college student once confronted Malcolm X at a Harlem restaurant and asked him the same question Tracy did: What can I do? To which Malcolm replied: “Nothing.” I’ve always thought the student deserved better than he gave her. After all, the fight for human rights is not a black thing. Human rights are a human thing.

Here, then, begins a series of columns — “What Can I Do?” — aimed at finding answers to Tracy’s question. It will be open-ended and run irregularly. I will be interviewing people who can provide Tracy — and by extension, the rest of us — concrete strategies for making change. Some of those I talk to, you will likely know; some may be new to you.

If you have a serious answer for Tracy — or think there’s someone I should talk to — send me an email: lpitts@miamiherald.com. Maybe I’ll write about it. Put “What Can I Do?” in the subject line. Keep it short— 1,000 word treatises will go unread.

Tracy asked something we all should be asking. Assuming the news does not intervene, our search for answers begins with my next column.

Saving house could be win-win I am writing to request that St. John’s Lutheran Church work with Historic Salisbury Foundation... read more