Horse removed from facility amid claims of neglect 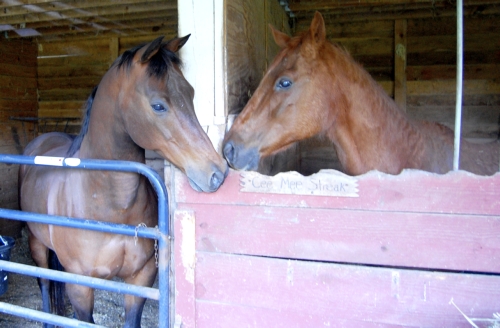 Wilson, left, greets Ceemee Streak after Ceemee arrived back home Wednesday. Ceemee had been at Highland Hill Stables before his owners took him back because they think he was being neglected.

A horse is back home after its owners said he was being neglected while at an equestrian facility for children.

Ceemee Streak, a 22-year-old male horse, was taken from Highland Hill Stables Wednesday evening after his owners, Robert Inge and his family, arrived at the facility with a temporary restraining order and a Rowan County Sheriff’s deputy.

Inge and his wife, Tracy, said they had an agreement with Lisa Young, owner of Highland Hill Stables, to let Young use and care for their horse.

Robert and Tracy said they let Young use the horse because they wanted him to be ridden more often after their daughter, who did most of the riding, had gone off to college.

Highland Hill Stables, on Old Mocksville Road north of Ellis Park, is home to more than a dozen horses. According to its website, services at the facility include riding lessons, birthday parties, field trips, boarding, day camps and therapeutic riding. The website describes the facility as “a Christian, family-oriented riding facility for kids of all ages to learn about horses, meet new friends, and have lots of fun!”

Asked about the situation Thursday, Young said she had retained a lawyer, but she would not comment further.

At first, Tracy said, she didn’t recognize her horse in an online picture and thought to herself, why would a child “ride a pony that sick.”

When she realized the horse was Ceemee, she told her husband and they quickly contacted Young. Tracy said Young put her off and made “excuses” as to why the horse seemed thin.

There was no money exchanged for the 22-year-old horse, Tracy said, and she and her husband offered to personally go to the property to retrieve him.

But they said Young wouldn’t return him or allow them to come get the horse.

Young told Tracy that she would get her veterinarian, Jay Moore of Rocky Creek Veterinarian Services, to look at the horse later in the week, according to Tracy.

Tracy said the horse couldn’t wait so she found and contacted Moore. She sent him pictures and told of Ceemee’s condition. The vet went to the stables the same day. Moore informed Inge of his visit and said he ran blood tests, de-wormed the animal and conducted other exams.

According to Tracy, the vet said the horse did not need to be put to sleep and he could be nursed back to health. He also said he’d like to work with the Inges to get the horse healthier.

“I said if she’s not willing to take care of it. We’ll pay for it,” Tracy told the veterinarian.

Tracy said she wanted an independent assessment of the horse and sent pictures of him to her vet, Dr. Andy Gardner. She said Gardner told her Ceemee did not get this skinny overnight and that he believes the weight loss occurred over months.

Other than some harsh words exchanged by both parties, Young let the horse go without incident after the Inge family arrived to get him Wednesday, shortly after 6 p.m. A court hearing on the restraining order, which allowed the family to take the horse back, is set for May 6.

Tracy said she and the sheriff’s deputy saw other emaciated horses at the stables and that the deputy told her she would alert animal control about the situation at Highland Hill Stables.

Ceemee was taken back to the family’s home in the country, south of Salisbury where the family commented on how skinny his rear end is — and how he was much thinner than the family’s two other horses. Later, Tracy told the Post that Ceemee has a large saddle sore.

Robert said he thinks Ceemee will survive, but that he will have to keep him separate from the other horses for a while.

Tracy said she blames herself for placing the horse in Young’s care before investigating the facility. She had never heard anything bad about the stables or Young.

“This horse is the sweetest thing. He’s an easy keeper, and for her to take him and … well, do what she did,” continued Tracy.

Robert also said he feels like he let his horse down by sending him to Highland Hill Stables.