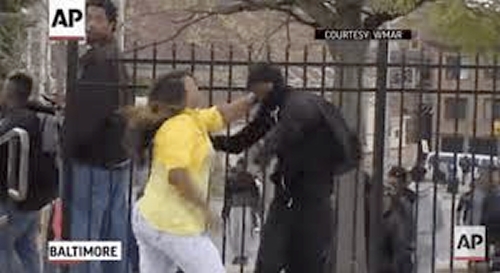 Toya Graham goes after her son to get him out of the riot in Baltimore. Associated Press

It’s a good thing Toya Graham is a struggling single mother and not a professional football player. Otherwise she might be in jail.

As it is, she has become a hero — dubbed “mother of the year” — to people who long to see more discipline and accountability in the world today.

Many in the nation applauded Graham after she dragged her 16-year-old son out of a riot in Baltimore earlier this week. He had a rock in hand, ready to lob it at police. Graham let him know what she thought of that with a string of expletives and some pretty determined slapping — going so far as to chase him down the street to administer a few more licks — all caught on someone’s camera.

Yes, she was aggressive and loud. No, most people don’t condone slapping a child. NFL player Adrian Petersen faced criminal abuse charges just for taking a switch to his young son.

But here’s why so many cheered her actions. Graham stood in direct contrast to the out-of-control crowds that looted and burned their Baltimore neighborhood. For that, you could almost hear the nation give a collective sigh of relief. An angry mother was able to accomplish more than a whole squadron of police. She held her son accountable.

We should not take pleasure in seeing a kid get smacked around, and striking a child in anger is never good. But Graham’s actions need to be put into context. All parents worry about their children, and parents of young black men have to be particularly fearful right now. Unarmed black men have died at the hands of police in a string of incidents over the past year; imagine what could happen to a teen caught throwing rocks at officers. And then there was the chaos of the moment — a riot driven by people exploiting the tragedy of a young man’s death. Emotions ran high.

“I just lost it,” Graham said in one TV interview. “I was shocked, I was angry, because you never want to see your child out there doing that.”

As she said at another point, “I don’t want him to be a Freddie Gray.”

Toya Graham is having her surprising 15 minutes of fame. But she brought the focus back where it needs to be: What happened to Freddie Gray? How did this unarmed 25-year-old wind up with lethal spinal injuries after being taken into custody by police? Who is holding those officers accountable?

And what will it take to end this string of fatal confrontations between police and young black men?

The house at the center of debate between preservationists and St. John’s Lutheran Church is not a famous landmark or... read more