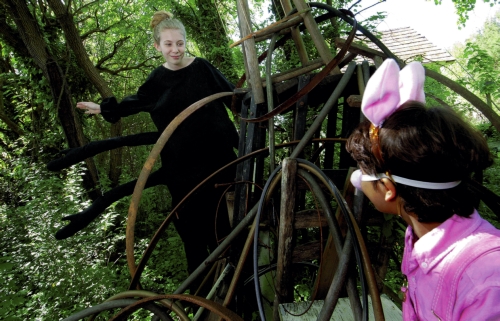 Charlotte weaves her Web at the Norvell Theater

The Children’s Literature Association called Charlotte’s Web “the best American children’s book of the past two hundred years!” Next Thursday the play version of E.B. White’s 1952 novel, adapted by Joseph Robinette, will take the stage at the Norvell Theater.

Charlotte’s Web is the story of a rambunctious pig named Wilbur and an unlikely friendship. After being sold to Mr. Zuckerman and moved to his farm, Wilbur is left yearning for companionship after being snubbed by the other barn animals; until a barn spider named Charlotte, befriends him.

When it becomes clear that Wilbur is destined for slaughter, Charlotte begins a campaign to save Wilbur by weaving messages in her web in an attempt to persuade the farmer to let him live. With the help of Templeton the rat, and other barnyard friends, the once “runt of the litter” becomes the prize-winning pig of the County Fair and the most famous pig ever.

All the dynamic characters from the story will be on the Norvell stage: Wilbur (Ali Khatib), the irresistible young pig who desperately wants to avoid the butcher; Fern (Frances-Gray Riggs), a girl who understands what animals say to each other; Templeton (Hayden Palmer), the gluttonous rat who just might have a heart as big as his appetite; and, of course, Literature’s most beloved spider, Charlotte (Brittany Schell), who teaches Wilbur the true meaning of friendship.

The obvious question that comes to mind when bringing this classic of literature to stage is; how is Charlotte, being played by a teenage actor, going to be able to weave a web in midair. To help answer that question, PPT has hired Las Vegas based, Flying by Foy.

Foy is the most prolific and widely respected theatrical flying service in the world, providing flying effects for some of Broadway’s most loved shows including The Lion King, Mary Poppins and Phantom of the Opera. Established in 1957, Foy’s innovative techniques and patented mechanical inventions revolutionized theatrical flight elevating the ancient practice of stage flying to a modern art form…and now they will do the same at the Norvell Theater.

In 2000, Publishers Weekly listed the book as the best-selling children’s paperback of all time. The book has sold more than 45 million copies and been translated into 23 languages. Based on a 2007 online poll, the National Education Association named the book one of its “Teachers’ Top 100 Books for Children.” The PPT version is a beautiful show about friendship, loyalty, and truth enjoyable for children and adults alike.