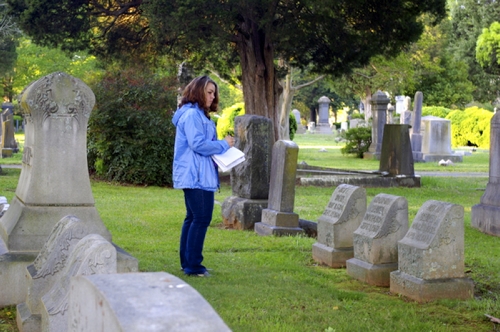 Most college students arrive on campus expecting to live a long, long life and planning to take courses focusing on the ways that humans live and think, knowing, as Socrates says, “the unexamined life is not worth living.” It might come as a surprise, then, that this spring 19 honors students at Catawba College chose to take a course entitled “Joining the Choir Invisible: On Death and Dying.”

Team-taught by English professor Dr. Janice Fuller and psychology professor Dr. Erin Wood, this honors course was designed to explore the biological, psychological, religious, and sociological phenomena at work when humans die and prepare to die. The course also explored postmortem realities, including how various societies treat human remains and memorialize the dead.

The course was structured around texts and films from a variety of disciplines, ranging from “How We Die” by neurosurgeon Sherwin Nuland, “Final Gifts” by hospice nurses Maggie Callahan and Patricia Kelley, and journalistic works on cadavers and American ways of memorializing the dead. The class also analyzed films like “Harold and Maude” and “Afterlife” and the television series “Six Feet Under” as texts to help them examine and develop their attitudes toward death.

Yet it may have been through experiential learning that the students most directly encountered dying and death.

Hospice volunteer and poet Michael Gaspeny spoke to the class about his closeness with patients faced with end-of-life decisions. Gaspeny’s stories brought the reality of working with distinctive dying patients to life.

“Everyone is an individual until that person disappears from this earth,” Gaspeny began. To make his point, he shared a few of his award winning poems about his hospice patients.

Students visited UNC Chapel Hill’s Exercise Science cadaver lab where they viewed two cadavers donated to the lab for the advancement of science. Despite the chilly room and chemical smell the students remained eager to have a hands-on experience with the cadavers.

“At one point I was able to hold the brain of one of the cadavers,” said Kala Byrd of North Wilkesboro.

The cadaver lab gave her an understanding of how simple yet complex the human body really is and what death takes away from the living person.

The visit to the cadaver lab prepared the students to read Marianne Boruch’s “Cadaver, Speak,” a 32-section poem written in the voice of a 99-year-old cadaver Boruch observed in Purdue University’s Gross Anatomy lab. After reading the poem, the students presented the poem through a theatrical reading that was open to the public.

The staging caused students to have vivid memories of the cadavers they had personally observed at the UNC lab and helped bring the poem’s 99-year-old cadaver to life. Sara Sellers of Salisbury commented that Boruch “presents this cadaver as a person who has a past and who has memories. The beauty in this is that the 99-year-old lived a full life before death. Death is better than not ever existing.”

On a chilly Saturday in March, the class took a field trip to local graveyards. These cemeteries gave the students insight into local traditions and values followed in honoring loved ones in distinctive ways.

“I was rather shocked by how much I loved the Salisbury National Cemetery. I am a staunch believer in individuality when it comes to after-death plans … (yet) I admired the uniformity of all of the headstones … These soldiers were a united force that fought for a common goal and that unity is still on display after death,” Michael Jones of Salisbury wrote.

For the final paper, students outlined the end-of-life plans that they might want to make, using Aging with Dignity’s document “Five Wishes.”

At the beginning of the class, many students expressed anxiety about the fact of death. Some admitted being unable to conceive of really dying – an idea that Jo Ann Beard expresses in her essay “Undertaker Please Drive Slow.”

“It is impossible to imagine not existing because in order to imagine you must exist,” Beard said.

And yet imagine and plan and enact death the Honors students did. Perhaps, after all, the unexamined death is not worth – well, dying.