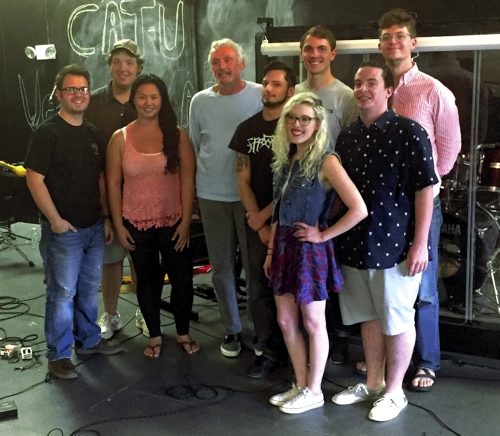 It is quickly becoming a tradition. The Catawba College Vernaculars will again perform one of the greatest albums of all time live with an individual central to its creation as special guest. Last year, it was Fleetwood Mac’s Rumours with Ken Caillat, the album’s producer on hand. 2015 brings the Eagle’s Hotel California with producer Bill Szymczyk in attendance. The performance will take place on Thursday, May 7 in the college’s Hedrick Little Theatre.

The legendary American rock band the Eagles released Hotel California in 1976. It went on to become one of the best selling albums in history, with Rolling Stone‍‍  ranking it number 37 on its list of “The 500 Greatest Albums of All Time.”

The Vernaculars’ performance of the entire Hotel California album live will be made even more special by the attendance of Szymczyk. An award-winning producer who has worked with a long list of top artists like B.B. King, Santana, the Who in addition to the Eagles, he will speak about the making of Hotel California at the May 7 performance.

“Bill joined us for a rehearsal last week, and was wonderfully kind and supportive. He also shared some great anecdotes with the student performers” says Dr. David Lee Fish, director of the popular music degree concentration at Catawba. “It’s both inspiring and a bit intimidating to have such a renowned producer present for a concert of an album he himself helped create.”

Free and open to the public, the Hotel California performance will feature top students from Catawba College’s nationally recognized popular music degree program. They will perform “New Kid in Town,” “Life in the Fast Lane,” “Wasted Time” along with the title song and the other classic hits from the album. Catawba’s Urb’n Sol student ensemble will get the evening off to a rousing start with a Stevie Wonder tribute. “It’s going to be a great double header,” says Dennis Reed, Urb’n Sol director and the college’s Young Artist in Residence.

Catawba is one of only about a dozen four-year colleges and universities in the country to offer a curriculum designed especially for students of popular music. It draws talented students from across the country. Five have won John Lennon Songwriting scholarships, better results than any other school in a national competition that draws thousands of entries each year. Such achievements have helped Catawba emerge as America’s Rock U.

Bill Szymczyk has been called a production legend for the historic albums he has helped bring to the world. Remembering the making of Hotel California, he has said “It was a hard record to do, but it was such a rewarding record to do. One of the greatest moments in my life was sitting in the control room at Criteria and having Joe Walsh on one side and Don Felder on the other.”

The Catawba College Music Department has been recognized as one of the fastest growing music programs in the country. Leading music education magazine In Tune Monthly has also selected it as a Best Music School for six years running alongside a short list of prestigious institutions that includes Juilliard, Peabody, and Berklee.

For information on the Hotel California concert, contact Dr. David Lee Fish at dlfish@catawba.edu or call 704-637-4345.