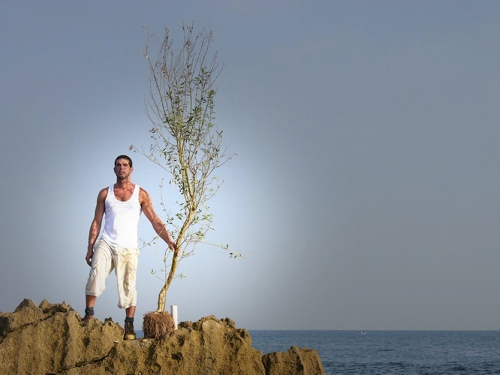 GREENSBORO — Ever since my trip to the Holy Land earlier this year, I have wanted to learn more about this troubled region.

That’s why I was fascinated to see “Zones of Contention: After the Green Line,” an exhibit of Israeli and Palestinian artists at the University of North Carolina at Greensboro’s Weatherspoon Art Museum that wraps up this Sunday.

My son and I stumbled upon the exhibition during spring break, and we were interested in finding out what it was all about.

The exhibit is small, but because it includes video installations, you could spend hours examining art created by seven artists who have lived in an area of conflict for generations.

Curator Xandra Eden writes in the exhibit guide, “Through photography, video, collage, and sculpture, the exhibit addresses some of the complexities of social, personal and cultural life amid the difficult circumstances in this region of the world.”

It should be noted that the joint participation of Palestinian and Israeli artists in an exhibit is rare, because of the result of the boycott against the Israeli occupation. That in itself makes this show a bit of a rare event.

In 1949, Israeli military leader Moshe Dayan drew a map of British Mandate Palestine to demarcate an armistice boundary following the Arab-Israeli war. That green line was the inspiration of the exhibit’s title. But thanks to the artists, we can view the exhibit through the eyes of everyday people who live in this area.

In it, he carries a dripping can of green paint along the Green Line. You can choose from among 11 different narrators, who share their personal histories as related to this line. During the course of the video, you can see how arbitrary that line is.

Another video is called “A Declaration,” by Yael Bartana, in which a young man rows out to a rocky outcropping off the coast of Israel, replacing an Israeli flag with an olive tree. The olive tree has long been a symbol of peace, and I discovered on my trip the importance of olive trees to West Bank agriculture. Some trees there date to the time of Christ.

The same artist recreated the work of Leni and Herbert Sonnenfeld in “The Missing Negatives of the Sonnenfeld Collection.” The couple had photographed Palestine and Eretz Israel from 1933-1948. Bartana used young Arab and Jewish residents of Israel to recreate these photographs. There is hope in every frame — hope for a better future.

In another video, Dor Guez, who lives in Jaffa, produced a video called “(Sa)Mira,” in which a young woman discusses a conversation with her boss in which she feels discriminated against because of her name.

He also saved some family photographs, nearly destroyed because they had been put in his grandmother’s kitchen drawer and stuck together. His grandfather had taken the photographs of his family’s desecrated gravesite in a Christian-Palestinian cemetery. In “40 Days,” Guez has enlarged those photographs to 3 feet by 2 feet. Although they were clearly affected by time, the photographs are still powerful. It’s hard to believe that someone would be so cruel, a final act of ugliness against someone from a different culture. Guez reports the culprits were never found.

Wafa Hourani, who lives in Ramallah, created “Panorama from Qalandia Project,” a mixed-media sculpture of cardboard and photographs that shows what it’s like to live in a Palestinian refugee camp, which is near one of the many busy checkpoints.

In “Sabbath,” Nina Pereg, who lives in Tel Aviv, documents the closing off of ultra-Orthodox Jewish neighborhoods in and around Jerusalem just before Sabbath. Men and boys drag out seemingly rickety gates, which nonetheless serve as barriers for their community. No cars are allowed during Sabbath, so the closed-off, silent area stands in stark contrast to traffic that whizzes by on the other side. Pereg shows how yet another barrier exists — albeit temporarily — between cultures.

When it was too expensive to try to get zebras into the Gaza Zoo, the owner simply painted two local donkeys to look like zebras. The video “Bath Time,” by Sharif Waked, who lives in Haifa and Nazareth, imagines what one of the animals might have gone through at the end of the day. This is a humorous look at some of the absurd situations the conflict has caused.

The largest installation in the show is “The Breakup,” by Michael Rakowitz. The artist comes from an Iraq-Jewish heritage and now lives in Chicago. He had the brilliant idea of paralleling the break-up of the Beatles with the breakdown in Middle Eastern relations that led to the Six Day War in 1967. Interestingly, the Beatles’ final concert was originally to be held in Libya during the same time period.

This installation includes video, text, collage, records, maps and other memorabilia. It was the one my son and I found to be most accessible.

“Everybody knows about the Beatles,” Eden notes. “Music through time connects us. I think it has helped with younger groups because it is something familiar. They realize that history is still relevant.”

“The Breakup” certainly helped us understand a bit more about the conflict in this area of the world. As did all of the exhibits.

And that’s exactly what Eden wanted.

“My whole concept was an attempt to create a space for artists who are representing different viewpoints, not right or wrong, but somewhat neutral,” Eden says.

The more research she did, the more she realized how little she knew about the Middle East. “We didn’t want to turn people away. We wanted them to think and look.”

The topic is one that you usually only talk about around the dinner table, Eden says, and it’s been gratifying for her to bring this issue into a public forum.

For more information about “Zones of Contention: After the Green Line,” visit www.weatherspoon.uncg.edu .