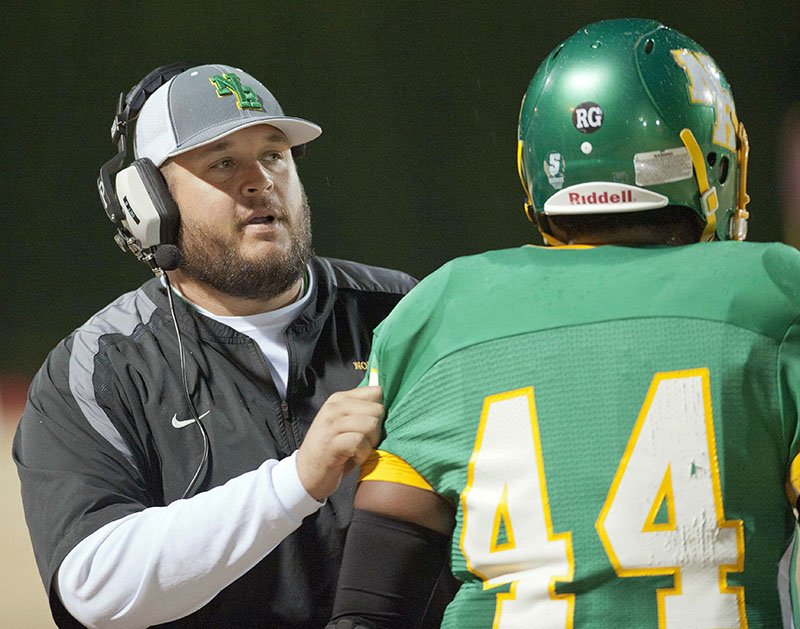 FILE PHOTO BY JON C. LAKEY / SALISBURY POST North Rowan’s Joe Nixon and Wesley Jefferies (44) in game with Surry Central in the first round of the 2013 NCHSAA 2A state playoffs. Nixon was announced as the next head coach on West Rowan on Tuesday. North Rowan hopes to name his replacement soon.

SPENCER — With the coaching carousel in full swing earlier this week, the only seat left open in Rowan County needing to be filled is North Rowan. The Cavaliers are in the market for a new head coach after Joe Nixon left to take the reins from Scott Young at West Rowan.

“The loss of Joe was big,” North Rowan athletic director Ben Hampton said. “You don’t want to lose a guy like that, who came and rectified North Rowan’s football program in three years.

“But at the same time, the decision has been made and we have to pull ourselves up by our bootstraps and try to get back on track with spring ball starting in less than a month.”

The new N.C. High School Athletic Association spring practice period is slated for late May. Hampton, also an assistant football coach at North Rowan, said the school wants to have the next coach selected and hired within the next two or three weeks.

As for a list of candidates, Nixon said Tuesday after being introduced at West Rowan he didn’t know of any succession plan at his former school.

“I hope it’s a smooth transition for whoever gets the job,” he said. “They have some great players and great support and whoever gets it will do a good job I believe.”

The job posted Wednesday. Hampton said he and principal Fateama Fulmore could start talking about candidates as soon as Thursday. Hampton, who was an assistant under Nixon, might be among those going for the job.

Nixon arrived in Spencer in December 2011 after almost a decade as an assistant on Young’s staff at West Rowan. The change in the Cavaliers’ program was immediate. The Cavaliers’ eight wins in 2012 were the same as the number of games they lost the season before.

The Cavaliers’ 31 victories from 2012-14 were two more than the combined total of the previous six seasons.

Hampton credited Nixon’s success to his ability to get the players to buy in to the idea of a football team being a family. He said the players could talk to Nixon about anything — on or off the field. It’s a quality the school hopes to find in Nixon’s replacement.

“I think with North Rowan, in this community, it has to be,”  Hampton said. “Not only the kids, but the people in the community are looking for somebody who is sold out for the kids, and I think that’s going to be a key factor in somebody considered for the job.