NASCAR: GoDaddy pulling sponsorship of Patrick at end of season 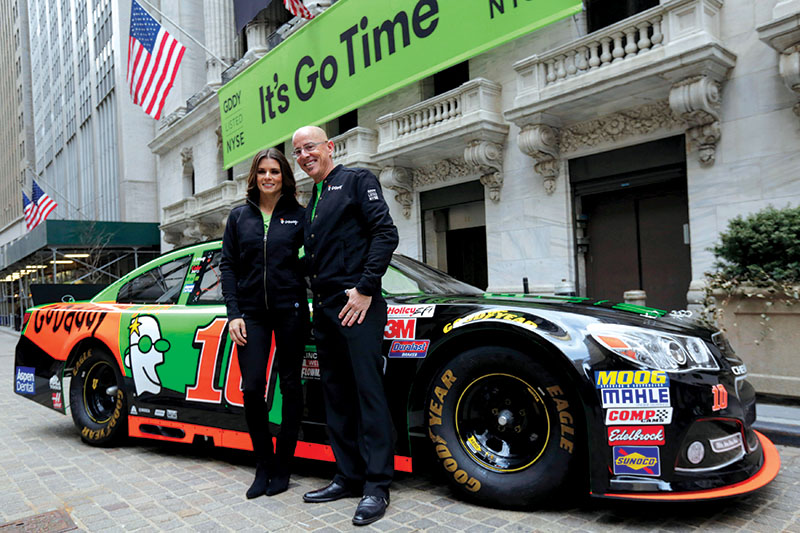 The Associated Press Driver Danica Patrick and GoDaddy CEO Blake Irving pose for photos April 1 in front of the New York Stock Exchange, before the company's IPO. GoDaddy announced Wednesday it was pulling out of sponsoring the Stewart-Hass Racing No. 10 racecar driven by Patrick at the end of the season.

CHARLOTTE, N.C. (AP) — It’s been at least a dozen years, by Danica Patrick’s count, that she has had to worry about sponsorship for her race car.

There has never been a shortage of companies lined up hoping to use one of the most recognized drivers in the world to push their brand.

Now she suddenly finds herself in the same boat as so many drivers: In need of sponsorship to fund her ride in NASCAR’s top series. GoDaddy said Wednesday it was leaving NASCAR at the end of this season, but will likely continue working with Patrick on a personal services agreement.

The internet domain giant has been with Patrick in some form since 2007, and became her primary sponsor in 2010 when she raced in the IndyCar Series for Andretti Autosport. GoDaddy moved with Patrick to NASCAR, and is in its third year as primary sponsor of her No. 10 Chevrolet in the Sprint Cup Series.

“I’m sad. I’m a little surprised and I’m sad,” Patrick told The Associated Press. “But to say I didn’t imagine this was not a scenario would be a lie. It’s bittersweet. It’s going to be really weird to think I won’t drive the bright green, can’t-miss-it car next year.”

Phil Bienert, the chief marketing officer at GoDaddy, told the AP it was strictly a business decision as data showed the company “we are past brand marketing in the U.S.”

Patrick has long been closely tied with GoDaddy’s growth in the United States, largely because of the advertising campaigns that featured the driver. She was initially used in multiple provocative campaigns, but GoDaddy has toned down that approach of late and concentrated on attracting the small business owner.

Still, Patrick remains a central figure in GoDaddy’s strategies. She holds the record for celebrities by appearing in the most Super Bowl ads; what would have been her 14th appearance was quashed this February when GoDaddy pulled its ad under pressure from animal rights groups. The GoDaddy spot featured a golden retriever puppy named Buddy finding his way home only to be boxed, shipped off in a van driven by Patrick and sold on the internet.

Bienert, who took over as GoDaddy CMO in March after nearly two years as GoDaddy’s executive vice president of digital commerce, said it’s far too early to determine if GoDaddy will have a presence in next year’s Super Bowl or if Patrick will have a role. He said the company is working on carving out a role for her.

“Danica transcends racing and is a real source of inspiration,” he said. “We are working now to see what our relationship looks like going forward.”

Bienert also said Patrick’s “record-setting season makes it tough to leave this motorsports sponsorship, without a doubt.” Patrick has two top-10 finishes this season and ranks 16th in points. Her two top-10s this year give her six for her career, most in NASCAR by a woman.

“With Danica, we see a driver with unparalleled resolve and tenacity,” Frood said. “She is an individual who transcends the sport and we look forward to fostering new partnerships for her and the No. 10 team.”

SHR has a deep roster of corporate partners, as does Patrick who has had at least two different companies featured on her car this year and has numerous personal services agreements with various products and brands. The list includes Coca-Cola, Chevrolet, Nationwide and Tissot.

“Nationally, maybe one of those is willing to step up to a larger level,” Patrick told the AP. But she also noted the possibility for a new company to come aboard the No. 10 to use both NASCAR and Patrick’s platform to build its brand.

Patrick has not been in this position since 2002 when she raced for Bobby Rahal in Toyota Atlantics.

“It’s a little bit scary and unfamiliar for me,” she said. “I’ve been very lucky as a driver to not have to worry about who is going to sponsor me.”

Patrick has also had the luxury of being picky about partnerships for her Danica Racing company. But a changing sponsorship climate has made her aware “it’s not so easy to just name your dollar and go get them anymore.” She said she’s hopeful any new sponsor will be mutually beneficial.

“Maybe there’s something out there that will be new and fresh, maybe reach a new demographic that both markets me and builds my brand,” Patrick said. “I’ve always encouraged my partners to use my platform to build their brand, and this is maybe an opportunity for something new.”