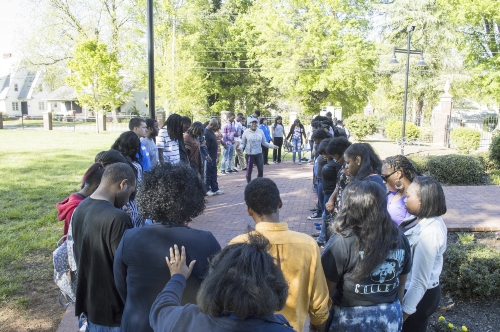 Josh Bergeron / Salisbury Post - Students gather near the front of Livingstone College's campus for a prayer rally Tuesday. The students prayed for peace in Baltimore following riots and in Nepal following an earthquake.

With the sun inching ever closer to the western horizon, several dozen Livingstone College students gathered on Tuesday afternoon to pray for peace in Baltimore after riots damaged the city and for Nepal following an earthquake that killed thousands.

The crowd of students gathered on Livingstone’s front lawn, holding hands and forming a circle adjacent to a statue of the college’s bear mascot. The prayer rally began in song before members of the group took turns offering up a prayer. Student Body President Raven Weathers was among the first to speak. Weathers prayed for strength in the midst of turmoil in Baltimore and in Nepal — bordering the Himalayan Mountains.

In Baltimore, riots and some peaceful protests have resulted from the death of 25-year-old Freddie Gray. Police arrested Gray without incident on April 12 for a weapons charge, according to media reports of the incident. He died seven days later of a spinal injury, but it’s unclear how Gray was injured. Riots following his death have resulted in intentionally set fires, injured police officers and wide-spread property damage. In Nepal, an earthquake has resulted in the death of more than 4,600 people as of Tuesday. Millions have been injured as a result of the quake and its aftershocks.

“I believe we all should pray for unity, and, not only unity but peace,” Weathers said. “It’s important to think about what God would want us to do in this time.”

“We knew that it was important for us to all get together as a school and realize that God is good,” she said.

“People are just going about it the wrong way,” Russell said. “You tax yourself even more by destroying your own neighborhood.”