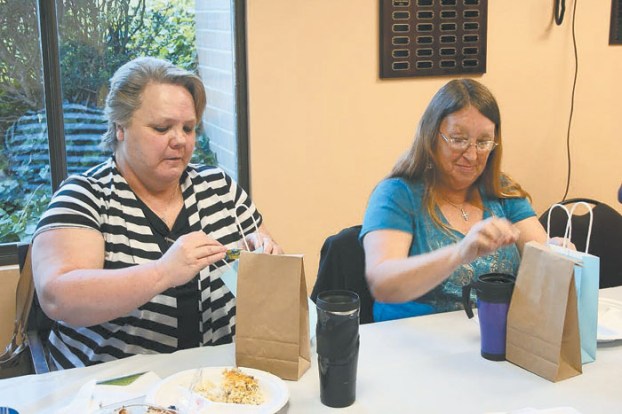 Kim Fortson and Angie Everhart look over their goody bags they received from Community Care Clinic for completing the Freedom From Smoking program. Susan Shinn/For the Salisbury Post

And that’s a good thing.

The four are part of a class of six graduates of the first smoking cessation class sponsored by Community Care Clinic. The clinic is one of three clinics across North Carolina — and one of 14 nationwide — that received a grant from CVS to fund the eight-week classes.

CVS made headlines recently when it pulled all tobacco products from its shelves.

“We talked about getting ready to quit, why you smoke and how to offset difficulties,” Repsher said Monday morning, as class members and clinic staff gathered for breakfast to celebrate the program’s success.

April 6 turned out to be Quit Smoking Day for the six graduates, and during the last three weeks, they’ve been supporting each other.

“Things were going on with my health and I was scared,” he said. “It was bothering me to the point I knew I had to make a change.”

He wanted to start running again, but didn’t want to end up with a stroke or heart attack along the way. Three years ago, he was diagnosed with Type 2 diabetes, and has lost weight.

He admits he fired up a cigarette five times during the course of the class — but only smoked about a half of one each time.

He said he’s most tempted to smoke when he’s working outside, or when he has some free time.

“I’m working through it with willpower,” he said. “That’s the part I hate the most — to put forth the effort.”

But his efforts have yielded results. His blood pressure is back to normal, and he’s cut back on the medicine he takes for diabetes.

“You’re conscious about what’s going on, so that helps,” he said.

Gross smoked for 40 years. She’s giving it up, she said, “because of my health. I’ve got too much to live for to let smoking take me down.”

Everhart smoked for 41 years and Fortson for 42 years.

Even though the class members are on nicotine patches for 12 weeks, again, thanks to the CVS grant, Fortson admits she’s nervous about it.

“I have COPD,” she said. “I have a very hard time breathing. Plus my granddaughter is only 4, and I want to see her grow up some more.”

Fortson said that many members of her extended family are smokers.

“I have come to the conclusion that it’s all psychological,” she said. “It is a mindset of what you want and how bad you want it.”

Everhart said she used to smoke on the way to work in the mornings, holding a cigarette in her left hand because it was closer to the window. However, yesterday morning, she put her right hand under her leg, without even thinking, and drove with her left hand.

All the women said they were having a hard time getting the smell of cigarettes out of their cars, and Perkins teased them they’d all have to buy new vehicles.

“You’re not buying cigarettes, so you can all go get your cars done,” Woolly said.

Woolly could not stop telling class members how proud she was of them. She thanked Repsher for volunteering to lead the class. “She loves you all so much. I know she is so thrilled for you.”

“Mary has been my motivation,” Gross said. “I don’t want to disappoint her. She worked so hard for us.”

The next Freedom from Smoking class starts in May, and Repsher invited all of the graduates to serve as mentors.

“You were all motivated from the first mention of this class,” said Emily Patterson, medical assistant. “We had a really solid first group.”

Although only 30 percent of smokers quit, Woolly reported that six of the nine class members finished the course — a 67 percent success rate.

Staff members will continue to support their patients. They have offered to walk with them any time — one way to help cut nicotine cravings. Woolly and her staff have encouraged the graduates to begin an exercise program now that they’ve kicked the smoking habit.

“If you want a cigarette, get down and do these exercises,” Gross said. “Right now, when I get the craving really bad, I grab the dog and we walk. He is loving this.”

Like many ex-smokers, Everhart said she feared gaining weight, but reported she’d lost 3½ pounds over the last week.

One mother and daughter took the class together, and both graduated.

“It was exciting,” the daughter said. “We both had each other for support. It was actually great to have that support close to home.”

Class members will continue to support one another. On Monday morning, as they tucked into breakfast casserole, fresh fruit and hot coffee, they traded e-mail addresses and Facebook information.

And sang the praises of the Community Care Clinic.

“I think this place is the most fabulous thing since chocolate candy,” Gross said.

“It saved my life,” Perkins added.

Gross is putting her cigarette money into a jar.

“That’s gonna be my Christmas money this year,” she said.

She can’t wait to come and speak to the next Freedom from Smoking class, because she’s happy to give her testimonial.

“This program does work,” she said.

School board, commissioners to meet for budget dialogue

The Rowan-Salisbury Board of Education and the Rowan County Board of Commissioners are turning over a new leaf this budget... read more