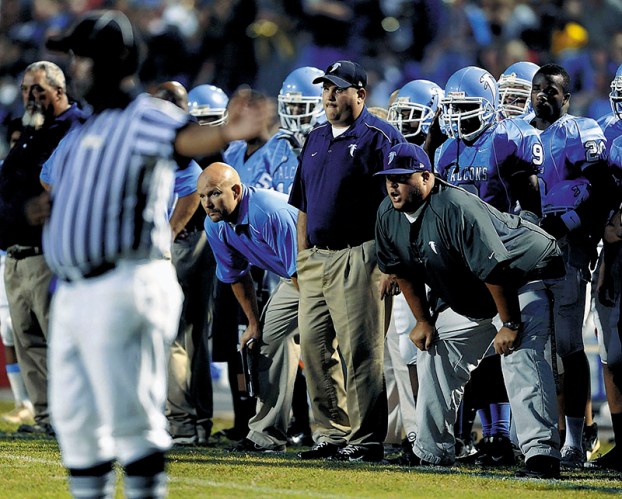 Prep football: Nixon back in blue

The move back to coaching in Mount Ulla is somewhat of a homecoming for Nixon. He was hired in 2004 to coach the offensive line and was promoted in 2006 to be Young’s offensive coordinator. He called the plays for the Falcons’ run of back-to-back-to-back 3A state championships and then-nation-leading 46 straight wins.

“He’s coming back to take over a program he helped build,” Young said to the players.

Nixon left West Rowan in December 2011 to take the head coaching job at North Rowan. In the past three seasons, the Cavaliers went 31-8 and reached the state playoffs in each season.

Their best season with Nixon was 2013 when they went 13-1. The Cavaliers spent a majority of the year as the top-ranked 2A team in the Associated Press high school football polls and advanced to the third round of the 2A state playoffs. They lost to eventual state champion Shelby in a game that featured two of the top teams in the Western region.

West Rowan athletic director Todd Bell said Nixon was the school’s natural choice for the head coaching position among a handful of applicants.

That doesn’t necessarily mean it wasn’t a difficult choice for Nixon to leave North Rowan. He repeatedly said the Cavaliers’ players, fans and community were “nothing but great” and called this one of the toughest calls he’s had to make.

“I was really torn in the decision, but ultimately we had to make a [choice] that I think was best for my family and be closer to home,” Nixon said. “I think anytime, as busy as we are, we can steal time to get with our kids, we need to take advantage of it.”

Nixon and his family live just five minutes from his new gig. His wife Hillary Hampton Nixon was an athletic superstar at West Rowan in the early 2000s. She played on two state champion softball teams and was the school’s leading scorer in girls basketball when she graduated.

Young said this transition “should be as easy as a coaching transition could be.”

Nixon’s goal is to continue the championship tradition West Rowan built under Young. That was among the strongest parts of his first message to the West Rowan players.

As hard as the decision was for Nixon to leave North Rowan, it wasn’t that way for Young in his choice to step down as the Falcons’ head coach.

Young, who was named West Rowan’s head coach in 1998, had open heart surgery March 31 and is awaiting a heart transplant. He said nothing can be done in that regard until after October 1 because his body needs time to fully recover from his recent surgery.

Young has a ventricular assist device in his chest to pump blood through the body, and he has to wear three machine packs weighing a combined 17 pounds at all times.