Cookbook is for the birds 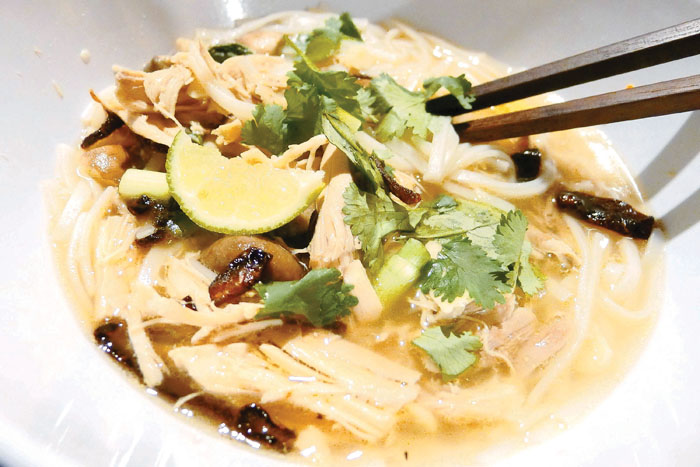 Vietnamese Chicken Pho from "A Bird in the Hand" by Diana Henry. (Bob Batz Jr./Pittsburgh Post-Gazette/TNS)

Before British food writer Diana Henry embarked on her first U.S. book tour earlier this month, she got some advice. From her mum.

“Don’t be drinking ANY alcohol & make sure you get to bed early — no parties,” Ms. Henry shared in a tweet, which she hashtagged #nofun.

She wound up having “a blast” for almost two weeks as she traveled from Nashville to Washington, D.C., to San Francisco and to New York City before heading home to London.

There, the Northern Ireland native is the food writer for The Sunday Telegraph and other outlets, and the author of nine cookbooks, including her brand-new one, “A Bird in the Hand: Chicken Recipes for Every Day and Every Mood.”

I’m very fond of her cookbooks. So are lots of people — a growing number of them on this side of the Atlantic. This new one is another keeper.

That’s what she calls one beautifully photographed recipe — Chicken with Thyme and Lemon and Smashed Garlic Potatoes. “Very simple and very pretty,” she writes, which pretty much sums up the book. The 120 recipes range from classics and ethnic twists to salads and soups and roast whole birds. There is, naturally, a chapter with recipes for chicken leftovers.

My family made the roast chicken recipe below and used what was left to make the accompanying soup recipe. Both are keepers.

Interwoven with the recipes are Henry’s warm and no-nonsense musings on topics such as how “Chicken loves booze” and other ingredients. In “A nice bit of thigh,” she writes of her favorite part for no-hassle dishes, “Graduating to thigh meat was, in my family, a sign that you had grown up.”

Like a lot of us, she eats and cooks a lot of chicken _ at least once a week, she writes in the introduction. But the range of things you can do with chicken is so wide: “It’s the basic outfit that you can dress down (for picky children) or dress up (on those occasions when you want to present a dish that prompts everyone to ask for the recipe).”

The book is her answer to the question, “What the hell am I going to do with those” chicken thighs in the fridge. She purposely kept her recipes focused (“less well-known (ones) and riffs on the familiar”) and “tried to keep instructions on method to a minimum,” she writes. “Cooking chicken is basically easy and there’s no reason to complicate it.”

If you don’t already know her, I think you will love having her in your kitchen with you.

I had a lovely phone chat with her while she was staying at the Waldorf Astoria New York the morning before she flew home. “This has been a blast for me,” she said. “I’ve kind of been a kid let loose in the sweet shop.” She cited a brunch at San Francisco’s Bar Tartine as her most memorable of many memorable meals, and she had some grits squeezed in with lots of cookbooks in her luggage.

“I’ve never been keen on the Italian dish of pork cooked in milk, but I was convinced to try this by Faith Durand who runs www.thekitchn.com website,” writes Diana Henry. “She heard about it from Jamie Oliver and made some adjustments, and I have made my own. Faith thinks it is the best chicken recipe in the world and my children would be inclined to agree with her. You won’t believe me until you try it, but it is a great dish. The chicken stays completely succulent and becomes sweet, imbued with and enriched by the flavorings in the milk. The nutmeggy milk makes it a little like eating roast chicken with bread sauce (but without the hassle of making bread sauce). It is one of the most comforting dishes you could wish for.”

Preheat the oven to 350 degrees. Heat the butter and olive oil in a Dutch oven that can hold the chicken. Season the bird, tie the legs together if you want to, and brown it all over. Use 2 wooden spoons to turn the chicken over, seasoning it as you go. Try to avoid piercing the skin. Pour off the fat left behind in the pan (you don’t need to throw it out because you can keep it to fry potatoes).

Add the milk, garlic, bay leaves, nutmeg and lemon zest to the pot. Bring to just under a boil, then remove from the heat. Cover and cook in the hot oven for 1 { hours, removing the lid halfway through cooking. Baste occasionally, spooning the milk up over the bird.

At the end of cooking time the bird will be succulent and golden and the juices will be copious and slightly curdled. Squash the garlic cloves with the back of a fork so they break down and flavor the juices. Taste to check if you want to add a little more nutmeg.

Serve _ I love it with orzo or a rice pilaf _ spooning the juices over the chicken and whatever starch you prefer for a side dish. The vegetable you choose depends on the time of year. In winter it’s good with roast carrots, in the summer roast tomatoes and a salad of bitter leaves.

“In Vietnam this is made with freshly cooked chicken — the aromatics added as the chicken simmers — but I make it with stock (flavoring it with aromatics) and add leftover chicken,” writes Diana Henry. “It’s a brilliant way to make the best of a small amount of meat. Everything depends on the broth, which should be golden and fragrant; a rich stock, made with a carcass and the addition of chicken wings, is especially good” (she provides a recipe in the book).

“The embellishments — the herbs, shallots, chiles and beansprouts — should be added by diners at the table and you should offer wedges of lime, too, so people can season their pho to taste. That way, everything stays fresh and crisp. Offer Asian chili sauce, such as sriracha, for people to add if they want. The noodles can be cooked in the soup, but they make it cloudy, which spoils the sense of freshness.”

Leaves from a bunch of Thai basil (or regular basil), torn

Leaves from a bunch of cilantro

Put the stock into a saucepan. Add the ginger, star anise, garlic and chile. Bring to a boil, reduce the heat and simmer gently for about 15 minutes. Scoop out the ginger and star anise.

Cook the noodles according to the instructions on the package.

Now for the crispy shallots. Heat the oil in a small saucepan over medium heat until it reaches 275 degrees on a kitchen thermometer. Add the shallots and cook, stirring frequently, otherwise they will cook unevenly, until golden. This will take about 6 minutes. Lift them out with a slotted spoon and put them on a double thickness of absorbent paper towels.

Set a heatproof bowl on a work surface and put a metal sieve (not a plastic one) on top of it (you will drain the shallots and oil in this after another frying). Increase the heat under the oil and, once it registers 375 degrees on the thermometer, return the shallots and cook until they are crisp and well browned. This happens quickly, so you have to work fast. Quickly and carefully pour the oil and shallots through the sieve to stop the shallots from cooking, then transfer the shallots to a double thickness of paper towels. Let the paper towels soak up the excess oil. Sprinkle with salt. You can keep these, stored in an airtight container, for 2 days, although they’re really better fresh.

Add the fish sauce, lime juice, and sugar to the broth and heat it, then add the chicken and warm through. Put the broth into bowls, adding some noodles, and serve. You should have the herbs, scallions, beansprouts, lime wedges, chiles and crispy shallots on the table, ready for diners to finish off their own bowls as they like.