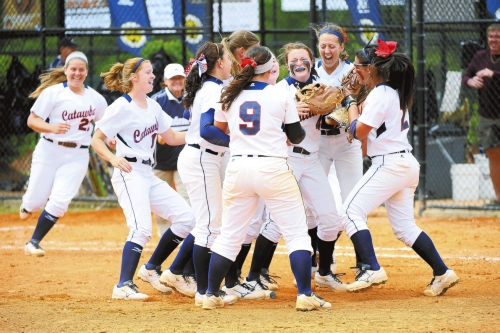 Catawba celebrates after the final out on Sunday, winning the South Atlantic Conference Softball Tournament in Hartsville, S.C. The Indians defeated Anderson for the title, 7-3. Photo by Tim Cowie/theSACphotos.com

Catawba junior Gina Gerone is a Brooklyn girl who once was the softball player of the year for the New York public schools.

Gerone is only 20 years old, but being a New Yorker, she knows all about Reggie Jackson, the Hall of Fame slugger whose greatest moments came with the Yankees long ago. Jackson earned his eternal nickname “Mr. October” on Oct. 18, 1977, by swatting three homers at Yankee Stadium in Game 6 of the World Series against the L.A. Dodgers.

“My dad (Anthony) is a retired New York police officer and he was working at Yankee Stadium when Reggie hit those homers,” Gerone said. “He’s told me that story many times.”

Mr. Gerone phoned his daughter Saturday night before Catawba played in Sunday’s South Atlantic Conference Tournament championship game in Hartsville, S.C., and told her he had a feeling she would go 3-for-3.

She did go 3-for-3 Sunday, although no one could have imagined her doing what Reggie did. Like Mr. October, Gerone belted three homers in three consecutive swings, her fifth, sixth and seventh blasts of the season. Her box score was a marvelous 3-3-3-5, and along with relentless pitcher Carley Tysinger, she powered the Indians to a 7-3 win against Anderson.

Catawba had never won the SAC Tournament championship, and while a Catawba player had hit two homers in a game 27 times, no one had ever belted three. It was a historic afternoon for Gerone, who is playing shortstop after two seasons at second base.

“We just kind of decided a few weeks ago that what we really wanted to do was get a ring and win a championship, and we did that,” Gerone said. “Two years ago, when Carley and I were freshmen, we lost on the last day of the tournament … but we were going to get it done this time.  We were going to do whatever we had to do. Everyone put everything on the table.”

The wind was blowing out. Catawba (29-15)  led, 2-0, before Gerone, who bats fifth in the lineup, even took a swing. Caroline Turner socked her seventh homer with one out in the first. Natalie Naturile followed with her sixth long ball. Taylor Adams nearly made it three straight homers, but Anderson’s right fielder, Courtney Czentnar, reached over the fence to make a remarkable catch. Then Gerone made it 3-0 by smashing a 1-1 pitch over the left-field fence.

“All I was thinking about was getting on base — getting on with a walk or an error would’ve been fine,” Gerone said. “But then I just let it go and hit it out.”

Gerone’s second homer against Anderson’s second pitcher was the biggest. She drilled the first pitch she saw in the third inning for a two-out, three-run homer. That made it 6-0. Turner and Adams had singled in front of her.

Gerone’s final homer, in the sixth inning on her third trip to the plate, iced the cake. Gerone heard Tysinger  yell, “Swing level!” as she walked to the plate.

“I thought they’d probably walk me that third time,” Gerone said. “But then she threw strike one right in there, and I told myself that if she was going for it, then so was I. I hit the second pitch.”

Home run No. 3  also left the park in center field.

Tysinger finished it off, striking out 11 to bring her staggering totals for the season to 25 wins, 28 complete games, 307 strikeouts and a 1.54 ERA. Tysinger set the Catawba strikeout record for a season as a freshman when she had 324.

“We have a great group of young ladies who totally support each other,” Catawba coach Nan Whitley said. “They have worked extremely hard all year, including 5:45 a.m. practices in the dark. We are extremely proud of  their accomplishments.”

The title was Whitley’s first since Catawba moved to fast-pitch softball in 1990. Whitley, who has been the Indians’ coach since 1983, enjoyed five championships during the seven slow-pitch softball seasons. In all, Whitley has coached Catawba to 733 wins during her career.

Catawba entered the tournament ranked seventh in the Southeast Regional, but earned the SAC’s automatic berth to the regional and will participate in regional play for only the second time — the first time coming in 2012.

The Indians lost their first four SAC games this season, but they’ve now won eight in a row and 14 out of 16.