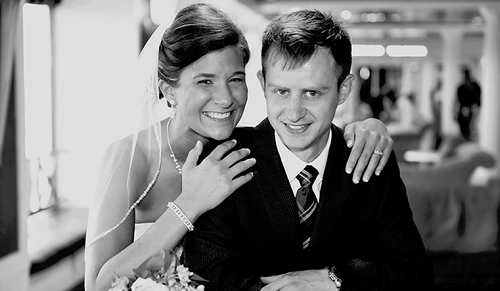 CHARLESTON, S.C. — Courtney Anne Strause and Adam Blake Yoe were united in marriage on Saturday, March 21, 2015, onboard the Carnival Fantasy Cruise Ship, S.C. A reception followed the wedding April 4 at Rowan Museum in Salisbury.
The bride is the daughter of Allen and Cindy Amerson of Salisbury and Kirk Strause of Sanford, and the granddaughter of Joyce and the late Albert C. Brown of Salisbury, and the late Mr. and Mrs. Robert Strause of Myerstown, Pa. A 2005 graduate of West Rowan High School, Courtney earned her Master’s and Bachelor’s in Business Administration with a major in Trust and Wealth Management, and a minor in Financial Planning. She is currently employed with Wells Fargo Wealth Management.
The groom is the son of Thomas “Tip” and Carlene Yoe of Granite Quarry, and the grandson of the late Mr. and Mrs. Thomas H. Yoe Jr., and the late Mr. and Mrs. Carlos White of Paris, Tenn. A 2007 graduate of East Rowan High School, Adam attended RCCC and is currently employed with the State of North Carolina and Virtual Sounds Entertainment and Productions.
Courtney and Adam followed their wedding with a 7-day cruise to Grand Turk, Half Moon Cay, and Nassau.

Rick and Robin Perry of Salisbury announce the engagement of their daughter, Raegan Jean Perry, to Corey Benton Anderson, both... read more