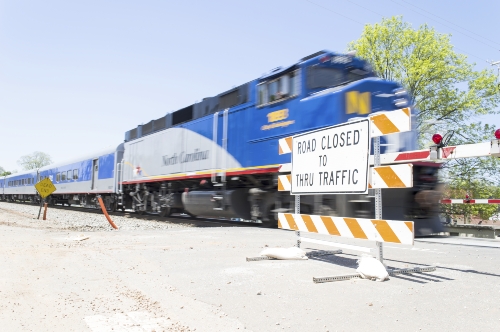 Josh Bergeron / Salisbury Post File Photo - An Amtrak train whizzes past a construction site in China Grove that was part of a project called the Piedmont Improvement Plan.

As railroad construction across Rowan County crawls along, traffic is backing up across roads in South Rowan and adding to commute times.

Construction to upgrade some rail crossings and close others disproportionately affects southern Rowan municipalities — China Grove, Kannapolis and Landis. In Salisbury, the only part of the Piedmont Improvement Program, which aims to increase safety at rail crossings and speed up commute times for trains, is the relocation of Klumac Road several hundreds yards south. A few construction projects sit north of China Grove adjacent to U.S. 29. The majority of projects, however, spans an area beginning at East Church Street in China Grove and ending at East Mill Street in Landis.

Residents of southern Rowan communities say construction has doubled commute times in some cases. Public officials in the area have concerns about emergency response times and the affect of road closings on business.

“We’ve got merchants downtown that are losing business because people are coming into town that would normally come in a certain way,” said China Grove Mayor Don Bringle. “We hate it, but we understand that there’s progress being made. The biggest dissatisfaction that I hear is the timeframe, especially in downtown China Grove where what was supposed to be a two-month project has now gone into four months.”

Started a few years ago, the Piedmont Improvement Program is described by the N.C. Department of Transportation as a way to modernize the state’s railways with railroad and highway construction projects.

By eliminating railroad crossings and by rerouting roads over or under train tracks, DOT hopes to prevent collisions on train tracks, increase the speed at which trains can travel and add trips for passenger and freight trains. The project also will add a second railroad track.

“Any time you’ve got a train or a pedestrian versus a vehicle, the train is always going to win,” said DOT Division 9 Engineer Pat Ivey. “Anytime we can separate that traffic, you’re going to be much better off long-term and especially when you’ve got a track when you’ve got trains traveling 79 mph. Our goal as a department and nationwide is to try and minimize the number of at-grade crossings, especially on a high-speed rail corridor.”

Ivey wasn’t immediately able to provide statistics about the traffic on rail lines in the Piedmont, but said the stretch spanning the distance from Raleigh to Charlotte is among the busiest on the east coast. The Piedmont Improvement Project’s description posted on DOT’s website states the Piedmont train service, which runs from Raleigh to Charlotte, was No. 1 in the nation in growth within the Amtrak system for 2012.

Various pieces of the Piedmont Improvement Program, individual roads for example, have different completion dates, but all construction is scheduled to wrap up by 2017. The completion date is tied to funding awarded for construction.

Ivey said the department attempted to ease any confusion by placing signs indicating detours and that local business were open on roads involved in the Piedmont Improvement Program.

As a result of road construction, residents in south Rowan municipalities and nearby neighborhoods say time to complete daily errands has doubled. Webb Road resident Stephanie Nail says trips that previously took five minutes or less now could take up to 20 minutes. Webb Road is among the streets in Rowan County recently closed for construction, but later scheduled to reopen.

“It’s all day every day,” Nail said. “You can’t go to pay a bill. You can’t run and get something to eat. You have to take a long route around for something that used to be a straight shot.”

Nail said she lives exactly 2.2 miles from work, but drives a much longer distance every morning because of the closures. She said the improvements may reduce the risk of train and vehicle accidents, but questioned how it might affect an average Rowan resident.

“What’s the train got to do with us and everyday life? It won’t help us at all,” Nail said. “It seems like now all the traffic from the interstate is using one exit because of all the closings.”

Rowan residents who live near street closures are only a portion of those affected. Similar to Nail, Rockwell resident Christina Shumake said her commute times have increased significantly.

Some neighborhoods, previously, quaint and free from traffic delays, have seen an uptick in the number of vehicles passing through.

Nail and Shumake work at the former location of Bebops on U.S. 29, which was forced to relocate partly because of the construction on Webb Road, adjacent to the business. Bebops is now a car lot which also is experiencing a lack of business, according to Nail and Shumake.

Bringle said he’s particularly frustrated with the closing of East Centerview Street, about three miles south of Webb Road. The project is now into its fourth month. Bringle said he was originally told the road work would only be a two-month project.

“It’s greatly impacted downtown as far as commerce,” Bringle said. “We thought 60 days wouldn’t be a problem, but unfortunately, when they open it back up, it’s going to be closed again later because then they’ll have to lay the second track down. It’s just a real headache for us.”

“We try to make sure that business are aware of it ahead of time so that they can plan for the future,” he said.

South Salisbury Fire Department Chief Cory Orbison said road closures affect his agency’s response time in its own district, and also travel time when providing mutual aid to other fire departments in Rowan. Webb Road’s closing isn’t a major rerouting, he said. However, when Peach Orchard Road’s railroad crossing, scheduled for closure as a part of a bridge project over U.S. 29, is permanently closed, Orbison said it would significantly increase some response times.

“You might just have to go three or four miles out of the way to get where you’re going,” he said.

With his fingers crossed, Zimmerman said fires in areas affected by closures haven’t tested his department’s response times. He is, however, concerned about how mutual aid response times from neighboring fire departments might be affected by the closures.

Zimmerman and Orbison both said a minute or two can make a significant difference in being able to put out a fire.

Orbison said public safety may be improved as a result of construction, but typical routes used by firefighters in his agency would have to be changed.

Looking at the current effects of closures on the South Rowan Community compared to plans for the final results, Bringle said he was unsure if the end product would be worth the wait.

“There are some improvements for us, but still there have been homes that were bought, business that were closed,” Bringle said. “It’s a lot for progress. Fewer crossings do mean fewer accidents, but at the same time you impede response times for emergency medical personnel, fire, police and all other groups.”