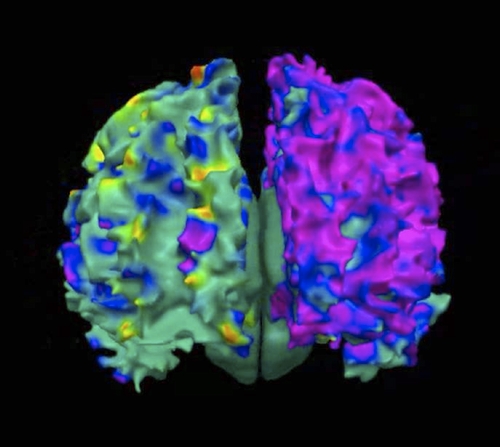 The purple area in this image of a newborn’s brain shows damage in the part of the brain that helps with language, math and logic. (Courtesy of Children’s Hospital of Los Angeles Saban Research Institute)

Optimistic Futurist: Teaching about Earth Day in a polluted school

Since the passage of the Clean Air Act in 1970, America has become much healthier.  According to the New England Journal of Medicine, our average lifespan increased almost three years between 1978 and 2001, and as much as 4.8 months of that can be attributed to cleaner air.

For people living in more polluted areas, like Pittsburgh and Buffalo, clean air increased life expectancy by 10 months. Every dollar spent on that effort returned more than thirty in savings in medical and other costs!

Some would argue we should now turn our attention to other pressing national issues, like our education system. Critics complain that schools are not doing their job. Educators respond that the student body of today is nothing like those the parents remembered. And they are right.

Ironically, a key hidden part of the education debate is air quality.

The number of students with brain damage from air pollution is significant.

According to the National Center for Health Statistics, over the past decade the number of children diagnosed with developmental disabilities increased by 1.8 million. Astoundingly, 10 to 15 percent of all babies being born in the U.S. now have some kind of neurobehavioral development disorder.

Researchers have identified two major pieces of the puzzle. First, doctors at the Saban Research Institute at Los Angeles Children’s Hospital found that the children of mothers who were exposed to certain kinds of air pollution from fossil fuels and industrial chemicals during pregnancy are five times more likely to have Attention Deficit Disorder (ADHD) and other learning issues.

Look at this image of a newborn’s pollution-damaged brain, from the Saban study. A healthy brain should be all green. The purple area in this image shows damage in the part of the brain that helps with language, math, and logic.

The second realization is that, in spite of overall progress made in cleaning up our nation’s air, one major source of continuing brain damage is air pollution in and around schools.

Kids are not little adults. As they grow, they go through a series of “windows of vulnerability” that pollution sneaks through. They also take in twice as much air per pound of weight as an adult – and their brain is a larger portion of their total weight.

Students attending schools located within several hundred feet of busy highways have significantly higher damage to their brain than those further from the pollution.

The University of Michigan scientists found that, regardless of any birth defects they may have, children who lived in, or attended school in, areas of high pollution for the first five years of life also developed problems with concentration, reasoning, judgment, and problem solving. They also have lower IQ.

There are some things that concerned parents can do. You can set up an “Idle Free Zone” near your child’s school. A kit of instructions, tools and training videos is available from www.momscleanairforce.org. A study done by Cincinnati Children’s Hospital found such programs to be very effective in creating a safer environment for the kids.

You can work with school administrators to install modern indoor air filters, which can reduce pollution by one half or more. Lawrence Berkley Labs found that every dollar spent on cleaning the indoor air in a school saved $33 previously lost through poor attendance of both students and staff.

School systems can also install air filters on their school buses to protect the riders. The University of California at Los Angeles developed an on-board school bus filter system that reduced air pollution 88 percent. While riding on one of these buses, a child is inhaling air as clean as the air on the beach at Santa Monica.

Washington State monitored kids who rode 188 school busses from 2005 to 2009. The kids who rode in buses with pollution-reducing equipment had a 6 percent reduction in absences — in addition to avoided brain damage.

School boards can increase monitors near schools so we can spot at-risk students. And as a society we can stop burning coal to make electricity – statistically, every 12 jobs involved in that process results in the death of one American every year, and damages the lungs and brains of hundreds of thousands more.

And talk about adding insult to injury – is it fair to blame the teachers for not doing their job well when their students with damaged minds do not do well on standardized tests?

To see the sources of facts used in this article, and learn of other successful money and lifesaving programs that can be implemented locally to create a better future for our country, go to www.TheOptimisticFuturist.org

“When you get a letter that says don’t drink or use the water for cooking, yeah, I guess you do... read more