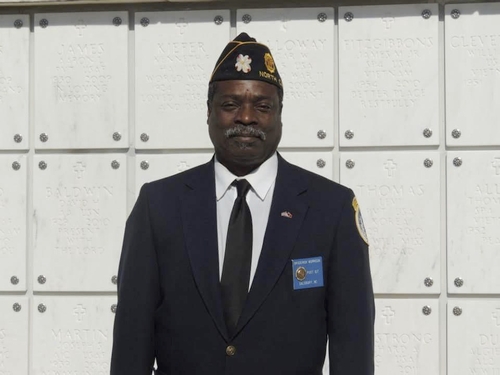 In June 2012, Broderick Morrison volunteered at the W.G. Hefner VA Medical Center for a game of Bingo. The experience was so great that he opted to sponsor his own game of Bingo. The closest date available was in December, so he decided to take a different route.

“I thought I should do something for Christmas,” Morrison said. “I talked with some ladies at church, and they volunteered to help cook a Christmas meal.”

After witnessing the impact of the Christmas dinner, Morrison vowed to make it an annual event. His heart for service led him to form RubySteene Morrison and Gladys Hawkins Gives Some Love Foundation, a nonprofit organization backed by J.C. Price Post 107. The name of the foundation honors the mothers of both Morrison and his wife, Patty.

A veteran of the United States Army, Morrison served a total of six years, three of which were active duty. A former patient of the hospital, his main goal is to make sure the current patients aren’t forgotten.

“I was a patient in the hospital during Christmas, and with family in Winston-Salem, I know what it feels like to be alone. A lot of the patients don’t get visitors, so I want to bring some Christmas into their lives,” he said. Aside from enjoying the dinner, patients also get to watch performances by local children and, of course, play a game of Bingo.

In the past year, regulations have been put in place that forbid Morrison from providing “home cooked” meals to the veterans. With the meals now having to be catered, Morrison is shelling out more money than before.

On May 23, J.C. Price Post 107 will be hosting a gospel concert to raise funds for this year’s dinner, which will be held on Dec. 19. Tickets are $10 in advance and $12 at the door. To purchase tickets for the concert or to volunteer with the organization, contact Patty Morrison at 704-314-6030.

“A smiling face goes a long way,” Morrison said. “It took major sacrifices for us to have the freedoms we have today, and those guys made them for us.”